Since the inauguration of its new stadium in January 2016, Olympique Lyonnais has had, like the biggest European clubs, an area which is part of its "OL City" project. OL City was imagined in the club's "Full Entertainment" strategy to become the new leisure and sports hub of activity for the Lyon metro area. Its development continues, and here is some detailed information about the OL City projects already in operation and those which are set to open soon.

OL City consists of the Groupama Stadium with its major events (matches, concerts and shows) but also activities offered to all audiences (seminars, stadium visits, OL: The Museum, the Bocuse brasserie, street art ...) .

Several infrastructures are already operational, such as the "Kopster" hotel, the Grand Large medical center, the "Unilians" biomedical laboratory and the "Les Loges" office building. Other projects that should soon see the light of day include the Arena, the office building "the Stadium", the Leisure Center and the Tennis Academy of Jo-Wilfried Tsonga.

LEARN MORE ABOUT THE PROJECTS OF OL CITY:

The leisure center, under construction, will begin to welcome visitors in the fall of 2020.

Comprising more than 23,250 m², the new leisure center in eastern Lyon will offer the public numerous activity and leisure areas: a ninja course, bowling, billiards, laser game, mini-golf,  a wave pool, an escape room, a fitness studio, padel, badminton, arcade games, karaoke, climbing, as well as many other activities in almost 80% of the total space of the building. Restaurants, cafés, and fast food, including the famous Lyon brewer Ninkasi will also be offered to the public and open every day. 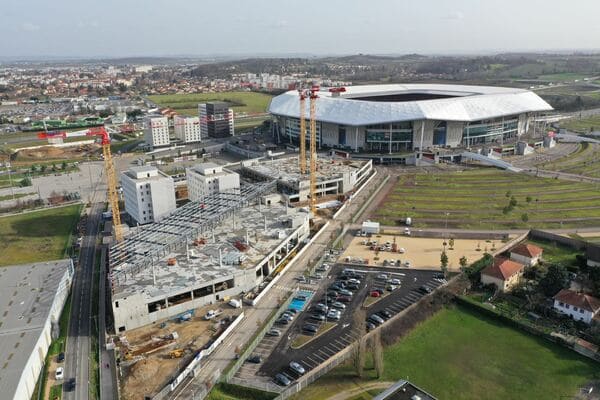 Tennis Academy « All In Academy »

The high-level training training academy, overseen by Jo-Wilfried Tsonga and Thierry Ascione, will open in September 2021.

The project will comprise 3.5 hectares of high-end facilities to accommodate the best of tomorrow's tennis. Based on a strong and innovative concept, the All In Academy will be a high-level structure, combining sport, passion and studies, driven by the desire to develop in a setting conducive to the development of tennis. 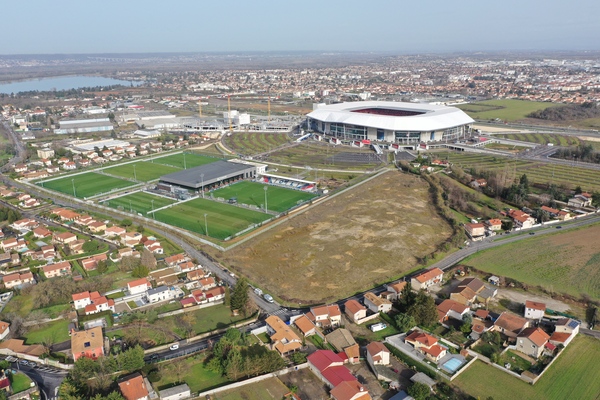 The Arena will be the largest event hall in France outside of Paris. It should start operating by 2023 with a target of around 100 events per year.

OL will own 100% of this new arena which will host sporting events for up to 12,500 people, including: 17 Euroleague matches of  LDLC Asvel (following the strengthening of the synergy between the two clubs), eSports competitions (following the merger of its FIFA team with LDLC to create the LDLC OL team) and the hosting of two major tennis tournaments in connection with the launch of the “All In Academy”. The Arena will also annually offer more than 85 shows / concerts for up to 16,000 people, large-scale seminars and BtoB events with a capacity of up to 4,000 people.

The arena will be located near the stadium and the tram station for easy access.

Daily accessibility to the stadium

A flagship project since the construction of the stadium, the T3 tram shuttles, which serve the stadium on event days, will offer daily service between Soie and OL City from autumn 2020 with the arrival of T3. This project will strengthen the peri-urban connections around the Lyon Metropolis.

The T3 Bis Tramway will therefore serve OL City daily from the Vaulx-En-Velin la Soie station with an improved frequency of every 15 minutes during peak hours. The trams which will depart from La Soie to reach the Stadium via intermediate stations, will offer, on this section, 25% additional capacity to passengers on the line. Also, since July 2019, two new autonomous “Navya” shuttles, driverless vehicles, have been integrated into the TCL network, and offer a direct connection between the Décines Grand Large station of the T3 tram line and the Stade. 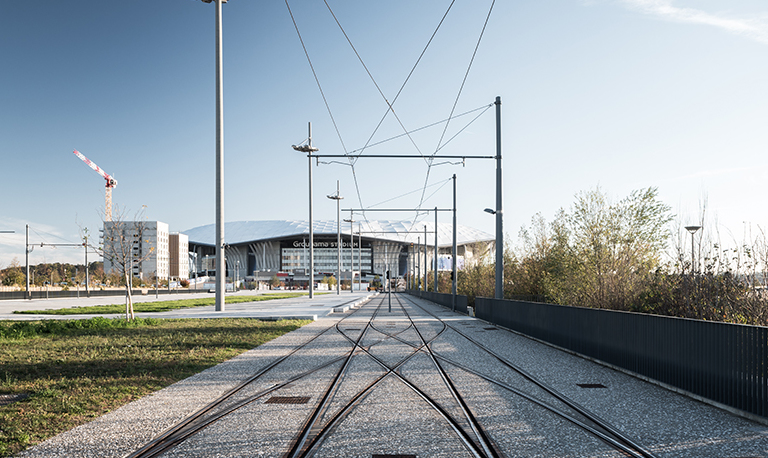 OL City is being developed to promote employability. The construction of OL City and the Arena is expected to generate more than 2,000 jobs during the construction phase and ultimately should secure nearly 1,000 jobs when put into operation. Lastly, 2,600 jobs are expected to come to fruition on each day where there is a match or event (compared to a thousand at present).

The Grand Large medical center offers a wide range of health services for sportspeople but also for all audiences. In a 3000 m² building spread over 6 floors, 30 doctors provide consultations, bringing together around twenty specialties under the same roof. A second building houses the analysis laboratory and the headquarters of Unilians (Union of medical biology analysis laboratories - Loire, Rhône, Ain and Isère), a 2,300 m² facility specializing in saliva testing.

Open since October 2018, this 142-room 3-star hotel by the Lavorel group offers quality accommodation solutions for professional travelers, as well as tourists and fans coming to attend sporting and musical events.