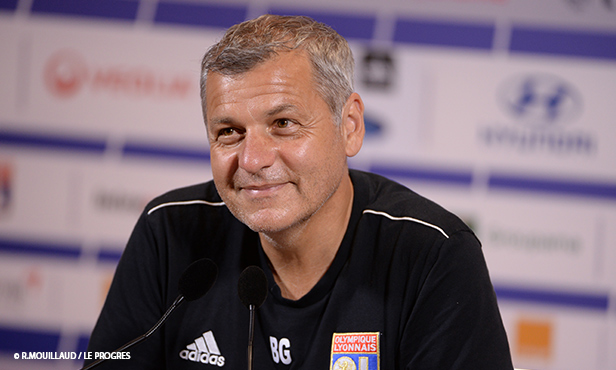 A day after his squad reported for preseason duty, Lyon's coach held his first press conference of the new term. The boss discussed a wide range of topics, including the summer transfer window.

« Only one player out of the 27 is missing. Memphis will be fined when he returns. He had five weeks of vacation like the others... The break was long enough. The summer holidays were longer than usual. Overall, the players look ready. We did physical tests this morning and the results are pretty good. Nobody is overweight even though some players have a few pounds to lose... It's important for Anthony Lopes to have a good break after the World Cup. Players need time off, especially mentally. He had only two weeks off two years ago after the Eurocup. I'll talk to him on the phone tonight and decide on a return date with him. »

« We must adapt to the financial reality. This year we decided to schedule good friendly matches while avoiding jet lag, extreme changes in temperature and long trips. We can prepare gradually. Almost the entire squad is here. We will raise the intensity little by little. We will play high-level matches. »

« We shouldn’t rush into anything. We kept the foundation of last season and signed Martin Terrier and Leo Dubois very early on. We know that we have two vacancies to fill. We must act fast, but not rush anything. We lost Mouctar, so we will need a central defender and I would also like to have an extra midfielder. I want a versatile player, a guy who can play all three midfield positions with defensive tendencies to be able to replace Lucas Tousart ... We were hopeful that we could sign Abdou Diallo. We are tracking other players, but the market is tough. We must meet several criteria, sporting but financial as well. Prices are frightening right now. We will take our time because the goal is to improve the team. »

« Nabil is with us, he is still involved [with the club]. He had expressed his wish move onto a club that’s even more high-profile than OL. The president had given him the green light. We'll see what happens after the World Cup. The uncertainty is hard to deal with, but it’s part of the job. I would be very happy if he came back. We have very important deadlines coming up in August. Nabil is considering both options. He will seize the opportunity if a very very big club goes after him ... I would have liked for him to play more for France. The tournament isn’t over yet. He’s made some good appearances. It's already a great moment for him. He still has a chance to start one of the next matches. »

« I want to keep him. I'm going to discuss the situation with him today. The door is never closed for our players. The market is so crazy. No player is immune to a very good offer. It's too early to say, but we want to keep all of our best players. »

« I'm waiting for him to fully establish himself, something that’s always tough to do. He had an exceptional season. I want him to confirm it both on and off the pitch. I think he can be even more decisive and more powerful in his volume of play. »

« This was a purely sporting decision and not done to influence Nabil. Yassin has many qualities. He can play any position in attack. He will be with us during the preseason. We’ll find out if he’s able to start the season with the first team. »

The return of on-loan players

« I hope we can find a solution for Olivier Kemen, either in the form of a loan or a permanent transfer. I'm going to look at Christopher Martins-Pereira. He has potential and can be useful for us. I’ll see how he performs this preseason before making a decision. »

« I think France have enough quality to eliminate any opponent. They will face a tough Uruguay team that defends very well. Les Blues have a good chance. They showed talent and character against Argentina… We can dream of of a semifinal showdown with our Brazilian friends. »