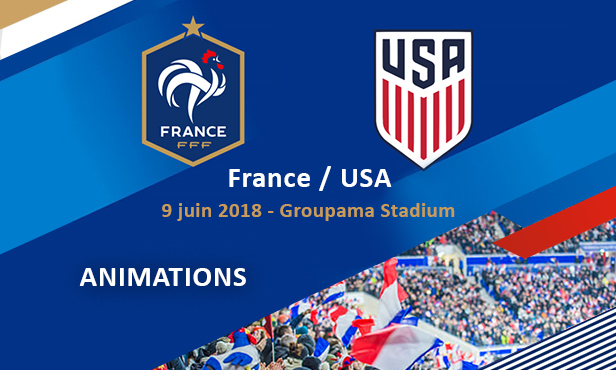 Saturday's pre-World Cup friendly between France and the United States at Groupama Stadium will feature plenty of pre-match activities for fans to enjoy before Les Bleus' send-off ahead of Russia 2018.

France wrap up their World Cup preparation Saturday night against the United States at Groupama Stadium, where there's sure to be a festive atmosphere during Les Bleus' final tuneup before flying to Russia.

There will be face-painting stations located outside the stadium beginning at 18:30 to deck fans out in the colors of France. Glasses, badges and other goodies will also be given away.

Beginning at 19:00 at the stadium stage, fans can enjoy a festive atmosphere and try get to get their hands on some of the Panini World Cup 2018 albums that will be given away!

Try to win French Team schwag by attempting to score a shot on goal into the trunk of a Volkswagen car!

Show your support for Les Bleus by putting stickers on a special wall display!

Take a picture next to a giant French national team jersey! A massive, inflatable jersey will be on display at Gate A. .

At the south end of the stadium, a space dedicated to the FIFA Women's World Cup France 2019 ™ will offer plenty of activities for fans.

Try your luck at foot darts! Adults and children alike can try to score maximum points on the giant target. A few steps away, an inflatable football pitch will allow youngsters to enjoy themselves before heading into the stadium to support their team.

A second giant Team France jersey will be on display near Gate M.

There will be a DJ playing music to get fans pumped up during the pre-match warm-ups. An honorary kick-off will be performed by Aimé Jacquet, legendary manager of the 1998 World Cup-winning French team.

Halftime activities will include the "KFC Bucket" game, where several participants in the middle of the pitch will aim for a giant bucket located in the penalty area, and the traditional "Orange Challenge" competition between two youth teams. .

<< Get more information about the France-USA
match in the Groupama-Stadium.com events page >>