Retro: A look back at OL's captains 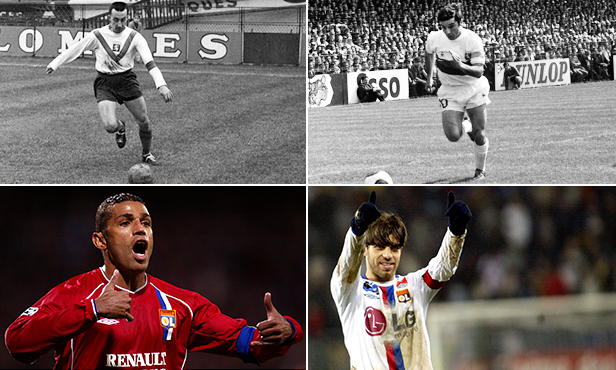 As we await Monday's official inauguration of the Olympique Lyonnais Museum, we take a look back at the history of our club captains. How many do you know?

Every player to wear the Olympique Lyonnais shirt has a special relationship with the seven-time French championship club. None more so, however, than our captains. Since the club's inception in 1950, 25 players have warn the armband, leaving their own special mark in history. From Fleury Di Nallo to Nabil Fekir, we look back at our greatest skippers.

Far from the powerhouse it would eventually become, OL grew from a humble new team into a truly competitive side in the image of their first captain: Fritz Woehl, who originally wore the  armband on August 27, 1950 in Lyon's 3-0 victory against CA Paris at the Stade de Gerland.

André Lerond, who sadly passed away last April at the age of 87, became OL captain during the 1951/1952 season. He wore the armband for nearly a decade and was the first team captain in a European Cup match - in 1958, against Inter Milan in the Inter-Cities Fairs Cup. A technically gifted player, Lerond left the club in 1959.

The most faithful: Aimé Mignot

With more than 20 years spent at the club - from 1955 to 1966 as a player and from 1968 to 1976 as a coach - Aimé Mignot is one of the most emblematic captains in Lyon history. A devoted defender, he scored the only goal of his long career against Hamburg in the quarterfinals of the Cup Winners' Cup. He also won the 1964 Coupe de France with OL.

Fleury Di Nallo is undoubtedly one of the greatest captains OL has ever known. The club's all-time leading scorer with 222 goals, the "Little Prince of Gerland" led Lyon to many great victories, including the Coupe de France title in 1967. A truly lethal striker, he scored 14 goals in 23 derbies.

The first captain of the Aulas era: Jean-Pierre Orts

Signed from Olympic Nimes in 1986, Jean-Pierre Orts played only two seasons at OL. During this time, the forward wore the captain's armband and was the club's first skipper of the Jean-Michel Aulas era. He notched 18 goals with Lyon, earning him the title of D2's top scorer.

The captain who led OL back to D1: Rémi Garde

The end of the 80s were a turning point for OL, as Jean-Michel Aulas took the reins of the club in 1987. From that point on, Les Gones made huge economic strides, not to mention on the field of play. Expectations were high, and in 1989 Lyon returned to the first division with Rémi Garde as captain. A standout defensive midfielder/defender who would go on to coach OL from 2011 to 2014, Garde was a natural leader who always put the team first. He shared the captaincy for two seasons with Jacky Colin.

A well-traveled footballer who played with OL from 1993 to 1996, Olmeta was a fiery, passionate character who also had the distinction of being Lyon's first and only goalkeeper captain to date.

The Brazilian striker arrived at Lyon during the 1999/2000 season from FC Barcelona and wasted little time in making an impact, establishing himself as French football's top scorer in his first two seasons. He was handed the captain's armband during OL's first title season of 2001-2002, ensuring him a permanent place in club history. In total, Sonny Anderson scored 84 goals for Les Gones.

Considered by many to be the world's best free kick taker, Juninho remains a Lyon fan favorite to this day. Throughout the 2000s, the Brazilian regaled the Stade de Gerland with his goals and his sense of the game. He scored 100 goals in the Lyon jersey, 44 of them vía free-kicks. A simply brilliant footballer.

Made in OL: Maxime Gonalons

A product of the Olympique Lyonnais Academy, Maxime Gonalons made his professional debut with OL in 2009, in a Champions League qualifier against Anderlecht. Less than two months later, in the group stage of the same tournament, he scored his first goal, fueling a 2-1 comeback win over Liverpool. A regular spot in the Starting XI would soon follow for the defensive midfielder, who would go on to wear the captain's armband for five seasons - one of the longest tenures in Lyon history

Another "home grown" Lyon star, Nabil Fekir wore the armband this season following the departures of Maxime Gonalons and Alexandre Lacazette. He's scored 57 goals in 154 matches with OL, leading the club to a Champions League berth next season.