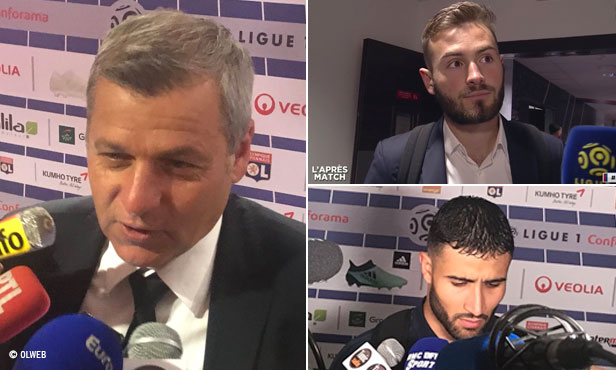 Lyon's coach and players spoked to OLTV after Satuday's season finale win over Nice that sealed their place in next season's Champions League.

« We must congratulate the players first. They had an exemplary season in terms of league results. I also want to congratulate all my staff and club officials. Throughout all the storms, the presidentalways supported me. There are a lot of emotions because our season rested on this match and we knew the importance of it. We can be proud of what has been built... Nobody panicked even after they opened of the score. We stayed calm and continued to play our game. There was an incredible state of mind throughout the whole group. We felt a strength ... Nabil Fekir was a leader for us again. He motivated everyone. There are many positive things to take from this season. The only thing I regret was being eliminated by CSKA because they were a team we could've beaten. It's hard for me to understand anyone who says they get bored watching OL play. There were a lot of emotions ... The banners hurt me a lot, I won't forget them »

« It wasn't easy but we did what we had to do. We stayed focused and scored the three goals. There is a lot of joy. We got the job done ... My future? I don't know what will happen. I was very moved after being subbed off. Thank you to the fans, it was a wonderful moment. We managed to win... I'm happy with my season and the team. Now it's on to the World Cup. »

« This is the culmination of the whole season. We worked hard. We started off on the wrong foot by conceding the early goal but we played a good second half. I want to congratulate the whole team. We had our share of disappointments this season, but we got what we wanted. There really is a soul to this team. We were able to respond when it mattered ... We understand the unhappiness of the fans but I think we've achieved our goals. »

« We knew it was going to go down to the wire. We didn't perform last week, we had regrets about that. We had a goal at the beginning of the season and we reached it. It's good for the players, the staff and the coach. There have been ups and downs, but we were able to meet the objectives. The victory in Marseille brought us back to life. We shouldn't forget where we came from and learn from our mistakes for the future ... I wanted to show Balotelli that I could be solid (smile). »

« I'm very happy. We were able to regain our aggressiveness after the break. It's a great night for the whole club with this Champions League qualification. »

« It's a great football moment. There are a lot of emotions tonight. I was tense during the match. It was a little crazy. We have to learn how to better manage our matches for next season. »