Reynald Pedros : « We were expecting this type of match » 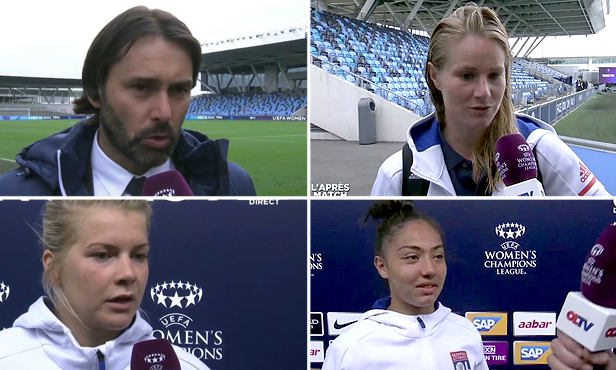 Reynald Pedros
« We were expecting this type of match. We are a little disappointed because we didn’t manage things that well. We came up just short in the final movements. We didn’t make the right decisions. We fell into their game. The second half went better for us. We had chances. We need to win the next match. It’s up in the air. These are very intense matches. We’re going to work hard in order to qualify. »

Ada Hegerberg
« We can do better offensively because we had many chances. There will be everything to play for next match. We have a week to prepare for it. We lacked patience... It was an intense match. There are still things to work on. »

Selma Bacha
« It was an intense match. It's not over, all will be decided in the return leg. We knew they were going to be aggressive and fully committed. We have a week to work on things and analyze this first leg. I hope we qualify for the final. »

Amandine Henry
« It was a real physical battle... We'll have to put in the necessary work in the return match. City slightly lowered the pace of the game in the second half. They're a good team. In the first half, we were were outnumbered in midfield. We had more possession after the tactical change and we had chances. It's a shame we didn't score. Next week, we will have to show that we are the reigning European champions. »