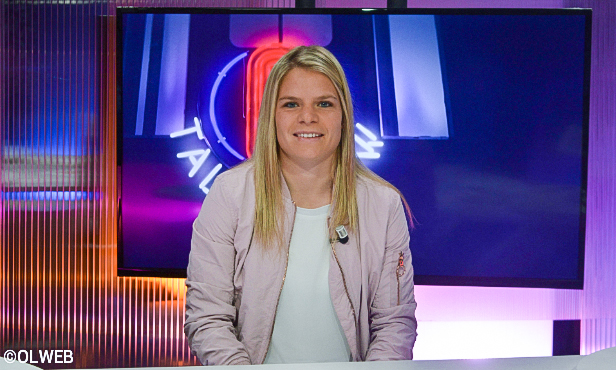 The OL striker was Héloïse Basson's guest Monday night on OLTV. Ahead of the Champions League return leg against Barcelona, she spoke of the current team mood and her own thoughts of extending her contract through 2021.

« It's a good team that likes to have the ball, especially in midfield. We knew that they had gotten stronger offensively during transfer window. Now, we have more confidence because we won the first match. It's just a shame to have conceded a goal. Personally, I would have preferred to play higher, in a striker's position. I regret not scoring earlier in the match. Their goalie made some great saves. But not many teams can do what we did. As soon as we conceded the tying goal, we stepped it up on offense and scored a second goal. And we even tried to put in a third. »

The current mood at the club

« You can see that there are a lot of smiles, but this is work and we're serious... After the match against Barcelona, t​​he coach congratulated us. Many people forget it, but we won the game. Some people say that we did not win by three or four to zero. But the Champions League is different from D1. So do not hesitate to congratulate yourself in the same way. »

« Lotta sent me a message congratulating me and I hear from her regularly. This record (225 goals in the league) belonged to one of the club's leading strikers who pushed me to success and the fact that I beat it is really something. I'm not only focused on goals, I also like to score. What matters most to me is the team performance. My statistics won't mean much of we don't win any trophies. »

Her contract extension with OL

« We had been discussing it for a few weeks. I feel good here and when the club offered it to me, I had a moment of reflection. Then, I made the decision to stay until June 2021 because I hope to accomplish even more things here. Now, I can project myself because it is not always easy to know what its future will be. The years pass by quickly, I've been here eight year ... " »

«I feel good with Les Blues, but we still have room for improvement, things to improve. When we lost to England (in a March 1 friendly), it was difficult to digest. But we managed to react against the United States and then Germany. We learn during each match preparing for the 2019 World Cup. We must constantly question ourselves. »