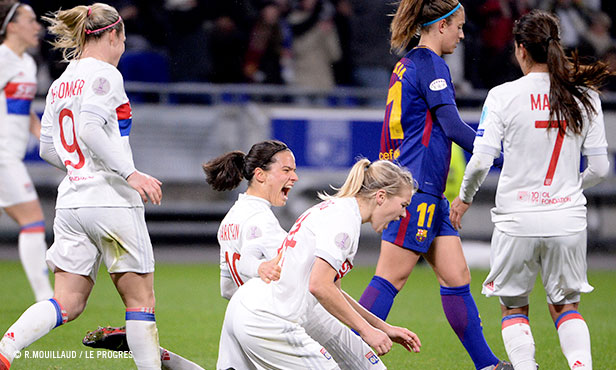 Dzsenifer Marozsán and Ada Hegerberg struck late in either half to give OL a 2-1 win over Barcelona at Groupama Stadium Thursday night in the first leg of their UEFA Women's Champions League quarterfinal tie.

OL's women's team came to play Thursday night at Groupama Stadium. The two-time defending champions - with four Women's Champions League titles to their name overall (2011, 2012, 2016, 2017) - took their game right at Barcelona Thursday night in their quarterfinal first leg: pressing high, controlling possession and sending cross after cross into the opposing side's penalty area. But Lyon's dominant display didn't translate into goals during almost the entirety of the first half. Their perseverance would pay off, however, as German international Dzsenifer Marozsán finished off a great individual run by Lucy Bronze (44 ', 1-0) just before halftime.

With Thursday night's game winner, the Norwegian striker reached 14 goals in the Champions League this season - tying the all-time record currently held by Conny Pohlers (with Potsdam in 2004-2005), Margrét Vioarsdóttir (with Reykjavik in 2008-2009) and Célia Sasić (with Frankfurt in 2014-2015). A historic goal that can potentially help OL advance to the semifinals.

OL's women's team is undefeated in 25 official games played this season with a stunning 25-0 record. And with Thursday's result, Reynald Pedros' players are that much closer to repeating last season's success. They remain perfect in the league (17 wins in as many matches), the domestic cup (3 wins in 3 matches, with 41 goals scored and none conceded) and Europe (5 wins in 5 matches).