Lyon get back to winning ways in L1 at Caen's expense 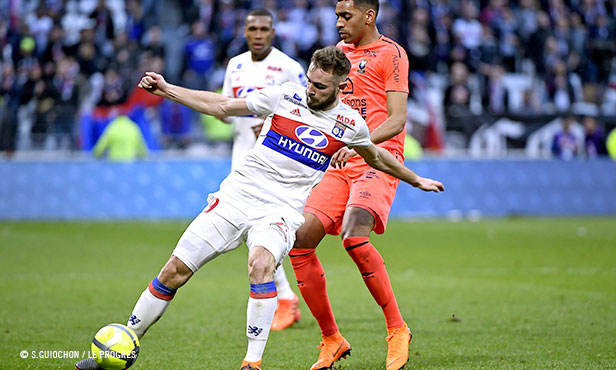 After a six-game league drought, OL finally got back to winning ways Sunday with a 1-0 decision over Caen at Groupama Stadium in Week 29 of Ligue 1 Conforama. Bertrand Traoré's lone goal gave les Gones all three points and a boost of confidence ahead of what's to come domestically, not to mention the Europa League.

19’. Traoré's dangerous free kick hits the top netting
35’. Great give-and-go between Mariano and Myziane, who forces a reflex save from Vercoutre.
41’. With Vercoutre charging off this line, Traoré sends a chip shot over the bar.
48’. Mendy's curling shot clinks off the post.
58’. Lopes and the post combine to stop Crivelli's header.
63’. A loose ball inside the box lands right at Traoré, who fires home from close range. 1-0.
65’. Mariano gets a good look, but his shot is cleared away by Diomande.
86’. Vercoutre blocks a left-footed attempt from Mariano.
87’. Memphis has space but shoots off-target from the edge of the box.
90+2’. Mariano goes it alone on the counterattack, smashing his shot wide of the frame.

Back from a grueling trip to Moscow, site of last Thursday's 1-0 victory over CSKA in the Europa League, OL returned to L1 action Sunday looking to end their six-game league winless streak against Caen. Without the injured Fekir, head coach Bruno Genesio also rested Memphis and Aouar, giving Myziane just his second league start. Lyon were clear dominators but struggled to create real danger for the visiting side. Traoré came close with a free kick (19 '), as did Myziane, who forced a reflex save from Vercoutre after a brilliant one-two with Mariano (35' ).

Les Gones upped the ante in the second half, and Mendy almost broke the deadlock shortly after the break with a curling shot that hit the post (48 '), The woodwork also came to the aid of Lopes on a dangerous Crivelli header (58'). Losing patience, the Groupama Stadium crowd began jeering the players. This didn't last long, however, as Traoré eventually gave Lyon the lead (63 ', 1-0) with his 7th L1 goal of the season. Mariano (65 'and 90 + 2'), Cornet (86 ') and Memphis (87') came close to adding a second but lacked precision. Missed opportunities without real consequences, since Caen failed to offer anything in return. OL finally got their first league win since 21 January (2-1 vs. PSG) and now have Thursday's Europa League return leg vs. CSKA and Sunday's high stakes clash with Marseille at the Stade Velodrome to look forward to.

Traoré puts things in their place

Just as the Groupama Stadium crowd was starting to lose patience, Bertrand Traoré silenced the jeers with a goal. At the right place at the right time, the Burkinabé striker took advantage of Mendy's deflected cross and buried a left-footed shot from close range. A poacher's goal that gave OL three much-needed points. .

With Sunday's narrow victory, OL put an end to a run of six straight league matches without a win, their worst streak since the 2015-2016 season. Three valuable points in the race for the podium since they allow Lyon to temporarily move within two points of OM, who faced Toulouse later in the day.

Jérémy Berthod :
« It was tough to play without Nabil Fekir and Houssem Aouar. It wasn't a great display, but sometimes you have to be content with these kind of performances, especially the three points... This is good news ahead of the next fixtures, Thursday in the Europa League against CSKA, and Sunday in the league against Olympique de Marseille at the Velodrome. »
Videos
Facebook
Tweet
Forum
Videos