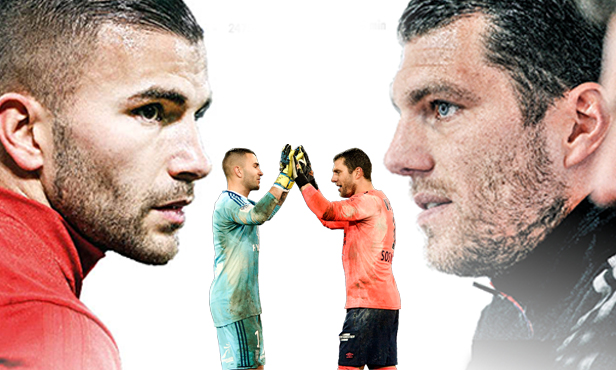 Lyon's past and present keepers face off this Sunday at Groupama Stadium during OL-Caen.

Anthony Lopes and Rémy Vercoutre were teammates at OL for several seasons under goalkeeping coach Joël Bats, before the former took over the latter's starting job during the 2013-2014 season. The ex-teammates will cross paths on Sunday, this time as opponents during Lyon-Caen at Groupama Stadium. We look at their current stats, while also comparing their numbers with Lyon.

Grégory Coupet is without a doubt one of the best-suited people to talk about both players. The best keeper in OL history and the team’s current goalie coach, Coupet has taken Anthony under his wing during his two-and-a-half months on the job, after following the Portuguese international for several years. Before that, he was a very close teammate of Vercoutre for six seasons.

« Both goalies are similar, especially in terms of fitness, even if Remy and Anthony are not really the same age (smiles). The Rémy I knew in training, at the time, for several years at OL, was a dynamic and very fit goalkeeper. He was also gave his all every time he was put to the test. This is one of his great qualities and these are characteristics that I obviously find in Antho, in all the specific things I do with him. He wants to grab everything and move forward on every action. These are great qualities that a keeper must have and share. They're both having a very good season. »

« Antho covers more ground on the pitch. That's what separates them. Remy is very strong reflex-wise and on the goal line. He knows he has a little less gas than before. He is still a great keeper. He is part of the brotherhood of L1 goalkeepers. He has a more commanding, more leader-like presence. He is not afraid to go face to face with opponents. Antho is perhaps less vocal but has the attitude, that's how he shows his leadership... He compensates with an attitude of authority. »