Lyon arrive in Moscow for Europa League showdown with CSKA 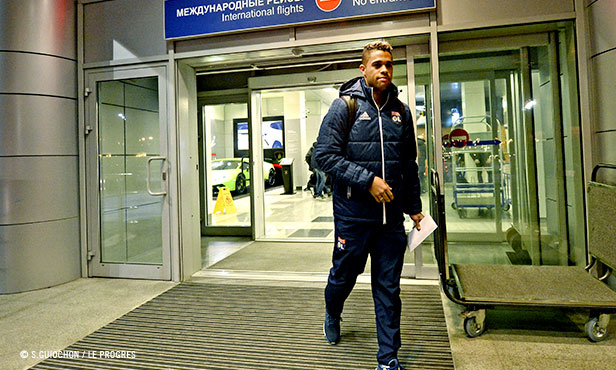 After a morning practice at the Groupama OL Training Center, the Lyon squad flew to the Russian capital ahead of tomorrow’s Round-of-16 first leg vs. CSKA Moscow.

Just as France is coming out of a cold winter spell, Lyon were greeted by sub-freezing temperatures in Moscow Wednesday afternoon on the eve of their Europa League Round-of-16 opener vs. CSKA. Shortly before takeoff on the team’s charter flight, a confidente Houssem Auoar said, “We are prepared to face such conditions. We’re traveling with jackets, tights, hats, gloves… After a few minutes on the pitch, we’ll be ok. We have to adapt, we have no choice.”

After a three-and-a-half-hour plane ride, OL landed at a snowy Vnukovo airport and immediately set off for the team hotel after going through customs. The cold, blistery conditions in Moscow (-10 celsius today) will be even worse during tomorrow’s match at the VEB Arena, where temperatures are expected to hit -14 degrees celsius.

For their latest European fixture, Lyon will once again be without captain Nabil Fekir, who returned to training today but still isn’t match-ready after recovering from a knee injury. On the other hand, Mouctar Diakhaby returns to the group after his absence in Montpellier. Myziane got the nod over Amine Gouiri.

Before departing for Russia, 21 field players and four goalies convened at the Groupama OL Training Center for a final session. Assistant coach Gerald Battle explained the reasons for a pre-flight workout.

We changed our plans this time. Usually, we travel in the morning and train on location in the afternoon to acclimatize and get a feel of the stadium. Since we didn’t have the chance to do that this time around, it didn’t make sense. And secondly, the four-hour flight made it impossible to do so. We will train at home, have a good session and then travel comfortably after a nice meal.

After working on last-minute tactical adjustments during Wednesday morning’s session, the 20-man roster chosen by Bruno Genesio headed to the Lyon Saint-Exupéry for their flight to Moscow, where tomorrow night (19:00 France time) they’ll continue their Europa League adventure at VEB Arena.

#TeamOL put the final touches on their preparation for #CSKAOL before flying out to Moscow ✈ with @NabilFekir and @Diakhaby_5 back training with the group ???????? pic.twitter.com/FfVxud7NFY