Lyon battle back for 1-1 draw at Montpellier 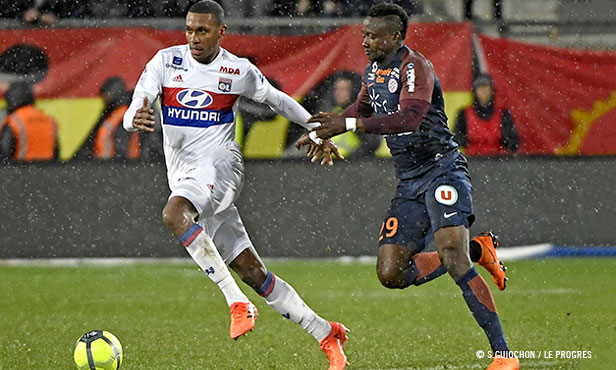 OL continue to make things difficult for themselves in the league by going six straight games without a win, following Sunday’s 1-1 draw at Montpellier. The race for the podium is harder than ever, although the team’s ability to overcome an early goal and awful weather conditions while salvaging a point on the road bodes well for Thursday’s crucial Europa League fixture against CSKA Moscow.

7’.  Aguilar finds Mbenza at the far post, and the Belgian beats Lopes to open the score. 1-0
39’. Mariano sends a header crashing into the crossbar from Memphis' in-swinging corner.
48’. Lopes denies Mbenza in the 1v1 after a dangerous Montpellier counter.
54’. Lasne rattles the crossbar with a long-range blast.
55’. Lecomte swats away Marcelo's goal-bound header with a diving save.
58’. Mariano pounces on a loose ball inside the box to level the score. 1-1
81’. Fantastic stop from Lopes to deny Ninga and keep the game tied.
88’. Mendy comes close with a right-footed effort that's just wide of goal.

With just two points in their last five league matches, OL made it known from the get-go that they were looking for the win at Montpellier. But without the injured Fekir or Rafael, the short-handed Olympians found themselves behind early on when Mbenza (7’, 1-0) beat Lopes from close-range after a fine service from Aguilar. The unexpected goal lit a fire in Lyon, who were forced to search for the equalizer under a heavy downpour of rain. Despite the awful weather conditions, Mariano (39’) almost leveled the score with a header that hit the crossbar.

After coming to life late in the first half, Bruno Genesio’s men almost went down for the count in the opening stages of the second half when Mbenza (48’) forced a huge save from Lopes following a dangerous counterattack. OL breathed a further sigh of relief after Lasne’s long-range blast (54’) crashed against the crossbar. The visitors then caught a break on the offensive side: MHSC failed to clear a ball inside their penalty area, allowing Mariano (58’, 1-1) to score the equalizer with a clinical finish. A deserved goal, considering the work they put Lecomte through in goal during several passages of the match. That said, the all-so-important three points still eluded Lyon, who remain on the outside looking in from a potential Champions League berth.

Crossbar to the rescue

Trailing 1-0 at halftime, OL almost saw their deficit doubled when Paul Lasne ripped a rocket of a shot from over 30 yards out that smashed against the crossbar. A stroke of luck that eluded them in the first half, as the same crossbar prevented Mariano’s header from tying the match. This time, the woodwork both helped and hurt Lyon.

With Sunday’s draw at Montpellier, OL have now gone six straight Ligue 1 matches without a win (three draws, three losses). To find a worse stretch of results, we need to go back to the 2015-2016 season, when the then-Hubert Fournier-coached Lyon lost five matches and drew one between Week 14 and 19.

Jérémy Berthod :
« The early goal conceded after a series of errors completely changed the match. It all but sealed the game despite the fact that we were the better team. The first period wasn’t that bad. We created chances. We were aggressive on offense, while Montpellier were all about the counterattack… We deserve credit for reacting the way we did after the goal. We dominated but lacked the necessary creativity to win the game. »
Videos