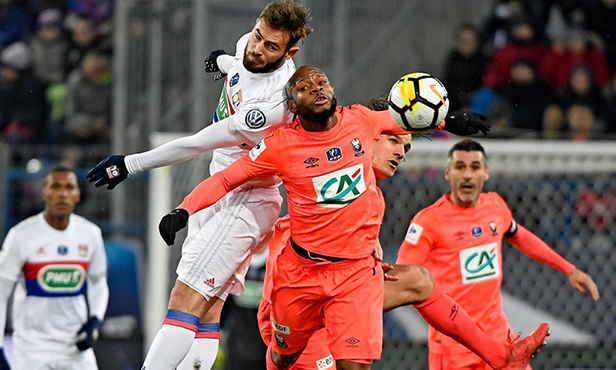 Ismael Diomande's lone goal in the 77th minute was enough for Caen to book their spot in the final four, where they'll host PSG. Despite a late surge, OL failed to get the equalizer and are left empty-handed.

18’. Peeters comes close with a free kick that's just over the bar.
33’. Diakhaby gets a head on a Memphis corner, but is way off-target.
37’. Myziane's header goes just wide of the post.
41’. Memphis sends a stinger into the hands of Samba.
67’. Stavitski gets a look at the back post, but skies his shot into the stands.
77’. Diomandé breaks the deadlock and puts Caen ahead. 1-0.
84’. Myziane has the equalizer at his feet, only to send his shot over the bar.
87’. Samba denies Cornet in the 1v1.
90’. Traoré sends a free kick into the box that Aouar heads wide.

Seriously slumping of late in Ligue 1 Conforama, OL were looking to save face in the Coupe de France, where a spot in the semifinal against PSG was up for grabs Thursday night at the Stade Michel-d’Ornano. With eight changes in the lineup compared to last Sunday’s 1-1 derby draw vs. Saint-Etienne, the Olympians struggled to create any real chances in the first half, other than efforts from Myziane and Memphis that couldn’t break the deadlock before the break.

Other than Morel coming in for the injured Diakhaby, the second half continued the same way as the first, with both keepers hardly seeing any real action between the posts. That all changed in the 77th minute, Anthony Lopes was beaten by a powerful Diomandé header that almost came out of nowhere. Down but not yet out, Lyon sought a late reaction and came dangerously close through Myziane and Cornet. Unfortunately, it was not to be. Now, OL will have to play all their cards in L1 and the Europa League, with two important fixtures coming up in the next days.

One shot on target, one goal for Caen

Since real offensive chances were few and far between, it was still anybody’s match despite Lyon enjoying the lion’s share of possession and offensive play. But Caen’s main weapon is the set piece, which is exactly how they tilted the series in their favor: Peters whipped in a cross to the near post, where Diomandé rushed in and connected a powerful close-range header (77’, 1-0). Despite several attempts to even the score, the lone goal would stand.

For the 13th time this season, OL conceded a goal in the last 15 minutes of a match - a defensive worst for the team. In their last four L1 games, they’ve conceded late equalizers against Saint-Etienne (90 '), Lille (82'), Rennes (93’) and Monaco (88’). Bruno Genesio's players have conceded 48 goals after their first 40 official matches for the first time in five seasons.

Jérémy Berthod : We have not been realistic enough tonight. We lacked finishing and the last pass. We controlled the game in the first period, before losing a little bit of possession after the break. Caen scored on free kick, one of their strengths. We then went all out on offense and created our best chances. It is a logical but frustrating elimination because we should’ve done better tonight. We didn’t have the attitude that was needed to qualify.