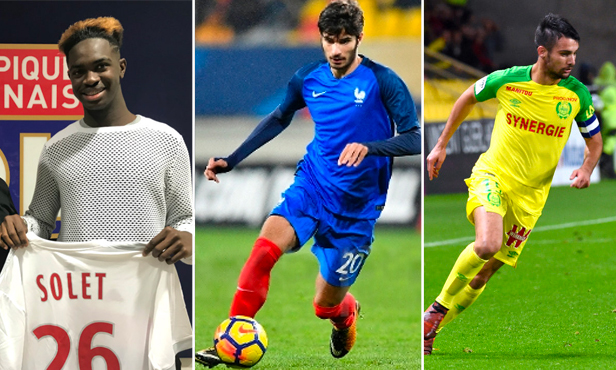 Just like the last summer window, OL were active in the 2018 winter transfer market. Martin Terrier, 20, Léo Dubois, 23, and Oumar Solet, 17, have committed their future with Lyon - with the former two poised to join the club at the end of the season, and the latter already working alongside his new teammates. Three promising young players that show the club's ambition.

This is the first professional contract for one of French football’s most promising talents. Last year, France U17 Lionel Rouxel entrusted Solet with wearing the captain’s armband at the FIFA U-17 World Cup in India, where the central defender played alongside Lyon standouts Amine Gouiri, Willem Geubbels, Melbi Bard and Maxence Caqueret. An undisputed starter with Laval in National 1, Solet put together a series of solid performances in the first half of the season, including 12 league matches and a Coupe de la Ligue appearance vs. Lorient. Since joining the club, he has already begun training with OL’s first team squad.

Loaned out this season by Lille to Strasbourg, where he’ll finish the remainder of the 2017-18 campaign, the young striker born in 1997 has needed little time to make a name for himself in Ligue 1. Martin Terrier has scored three goals and three assists in 17 league games this season - 13 of them starts. In addition to his impressive club performances, he has also shined brightly on the international scene with the France U21 Team. In six Euro qualifying matches, he has scored seven goals and notched two assists, for an average of a goal every 34 minutes. Terrier is set to take the next big step in career with Lyon, along with fellow up-and-comers Mouctar Diakhaby, Lucas Tousart, Tanguy Ndombele and Houssem Aouar.

???? Get all the details of the deal that brings @Martin_Terrier to @OL_English at the end of season

Like Terrier, Dubois will join Lyon at season’s end. Until then, he’ll continue captaining Nantes under the guidance of coach Claudio Ranieri. Already an established Ligue 1 player with 82 games under his belt, Dubois was tied for most assists for a defender in the French league last campaign. His seven were equal to a certain Fernando Marçal, who arrived at OL this summer from Guingamp. This season, The 23-year-old right back has notched an additional three assists, while also scoring his first professional goal.

???? Olympique Lyonnais have signed @leodubois15, who will join the club at season's end on a contract that runs through 2022 ???????? pic.twitter.com/QUawYMUD1U