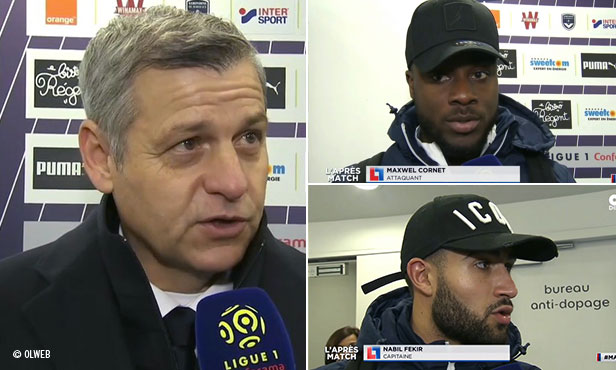 Bruno Genesio and his players gave their verdict on Sunday's 3-1 loss to Bordeaux.

Anthony Lopes :
« It’s a shame after putting in two great performances against PSG and Monaco... This just proves that we need to continue working and that nothing is guaranteed… We’ve done well so far, let’s not have any doubts and continue to move forward. There are still plenty of matches left to play, let’s move forward together. »

Bruno Genesio :
« It’s a setback for us. We can lose games, but I’m bothered by how we lost. We didn’t show the aggression that’s needed in an away match. Everything was going well for us, maybe subconsciously we thought that wearing the OL jersey was enough for us to win. We made two changes after halftime to try to shake everybody up and surprise our opponent, but it wasn’t enough. Except for set pieces, we didn’t really cause them any danger… We are very disappointed, but we must use this loss as a lesson for the future. »

Maxwel Cornet :
«It was a complicated match for us, we were surprised and conceded avoidable goals. We were too timid, we were outplayed by a good Bordeaux team, so we must congratulate them. We lost, it happens… We need to focus on the next matches. We will recover and get back on track. »

Nabil Fekir :
« We started the game badly, they had some opportunities and took advantage of them, even though I think the first penalty shouldn’t have been called. But these things happen. We mostly lacked aggressiveness… We need to keep on working, we will train well and try to win at Monaco.»