OL – SCO Angers : Lyon settle for a 1-1 draw at home in their return to Ligue 1 action 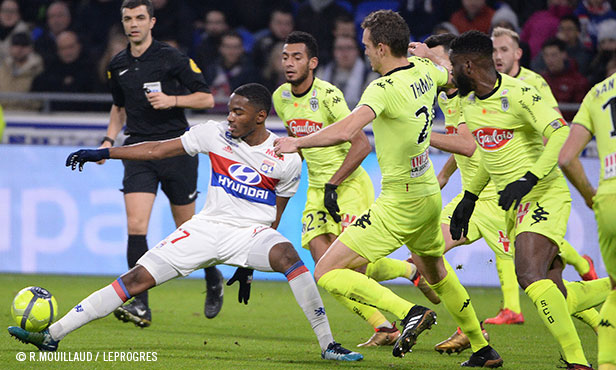 OL were forced to share the spoils with Angers after a frustrating 1-1 draw Sunday at Groupama Stadium, where a late onslaught wasn't enough to secure all three points.

14’. Morel called for the penalty on Fulgini, Toko Ekambi beats Lopes from the spot. 0-1.
19’. A quickly-played corner from Memphis sets up Fekir, but his shot is easily saved by Butelle.
28’. Toko Ekambi sends Lopes flying with a curling effort that's just wide.
29’. Some fancy footwork from Memphis inside the box, only for his cross to be deflected by Angers' defense.
32’. Cornet comes close to leveling the score with a bouncing header that sails over the crossbar.
47’ Fekir, on a assist from Cornet, slots it past Butelle to score the equalizer. 1-1.
57’. Toko Ekambi had only Lopes to beat but shanks his shot wide of goal.
70’. Memphis' header is cleared off the goal line by Thomas.
78’. An unmarked Aouar heads it right to Butelle.
80’. Gouiri almost gives OL the lead with a driving shot that hits the side netting.
84’. Tait heads to the showers early with his second yellow. Fekir's resulting free kick is saved by Butelle.
87’. Gouiri forces a close-range save from Butelle at the near post.

Winners of their last four Ligue 1 matches, OL were anxious to get back to league action after the winter break - especially after second-place Monaco dropped two points the night before with a 0-0 draw vs. Montpellier while Marseille easily defeated Rennes (0-3). With the injured Mariano sitting out, Myziane led the attack for a Lyon side that was quickly caught on the wrong foot: in a duel with Fulgini, Morel was called for a penalty that Toko Ekambi converted to give Angers the lead (14’, 0-1). A deserved lead for the visitors, who showed ambition and came close to doubling the score in the 28th minute, while OL struggled to create chances. 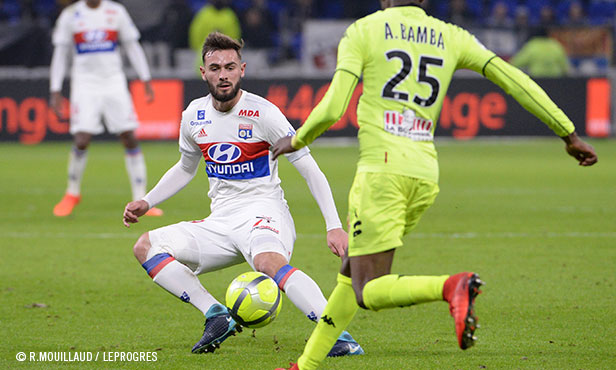 Lyon played with more bite after the break, pressing the visitors in their own half of the pitch and showing way more intensity compared to the opening 45 minutes. It was just a matter of time before Fekir took the ball from Cornet and slipped his shot past the keeper to level the score (47’, 1-1). The tying goal was the least OL deserved in what would be a dominating second half from the home team. With only the occasional Angers counterattack to worry about, Bruno Genesio’s men controlled the ball and created multiple chances. Memphis came closest with a well-placed header that was cleared over the goal line by Thomas (70’). Meanwhile, an unmarked Aouar wasted a golden chance by sending his header right at the keeper (77’) and second-half substitute Gouiri barely missed the frame (80’). Even after going up a man following Tait’s second yellow card (77’), Lyon were unable to break down Angers’ defense.

Everybody thought it was in…but Romain Thomas made a dramatic goal-line clearance to deny Lyon all three points. In the 70th minute, with Angers up against the ropes, Rafael sent a perfect cross to the far post, where Memphis connected a header past keeper Ludovic Butelle. Unfortunately for the home side, Thomas was at the right place at the right time to clear away the danger.

For the first time since sharing points with Evian (0-0) in the 2012-13 season, OL failed to win their first home match after the winter break. A streak that included wins at the Stade de Gerland and Groupama Stadium, and came to end with Sunday’s 0-0 draw vs. Angers.

Jérémy Berthod :
« It's a poor performance. A win was needed to take second place ahead of Monaco. We saw a two-faced OL tonight. Angers defended well in the first half… We were better after the break, especially on the offensive side. But we missed our chances and their goalkeeper made some nice saves. We must remember the desire shown in the second half. It’s still a poor performance. Angers managed to keep us off balance and also used a strong man-to-aman marking of Fekir. Myziane was too alone in attack in the first half. »
Facebook
Tweet
Forum