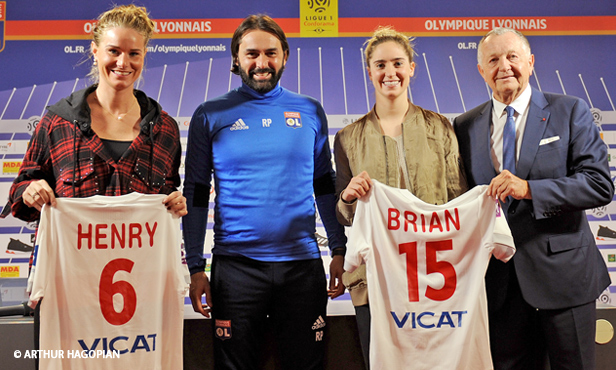 « We are very happy with the return of Amandine Henry, who is one of the best players in the world. Morgan Brian is recovering from a number of injuries so her preparation is going to take longer than our other players. She was a World Champions with the United States in 2015. We are very proud to have brought her to Lyon. All major clubs have developed their women’s teams. We play the (Uefa Women’s Champions League) quarterfinal against Barcelona, who have strengthened their squad a lot. But so have we. »

« We welcome two very talented players for the second half of the season. Morgan Brian needs a little time to begin playing again. Once she’s ready, we will need her. We know we have very high goals for this season, and the next one as well. Both players are natural midfielders. Morgan can play in three different spots in the midfield. We have less options in that positions, by choice. There were players who didn’t play and were dealt away: Claire Lavogez, Mylaine Tarrieu and Andrea Norheim have gone to Sweden, and Kenza Dalli should leave in the upcoming days. The winter market is now closed for us. »

« This is the best club in Europe, the world even. I wanted to come back. I want to add more trophies to the club’s collection. I will train every day with great players, which is good for my progress. This also is the best way for me to prepare for the 2019 World Cup in France. There’s a new stadium, a new training ground and a new team, but there is still the same core of players. The club is ambitious. »

« I think OL is the best club in the world. I’m coming off a very difficult year with a lot of injuries. This was the best decision for me. This is where I’m going to improve the most. I want to grow as a player in this club. OL is well known abroad. I saw that Alex Morgan really enjoyed it here. »