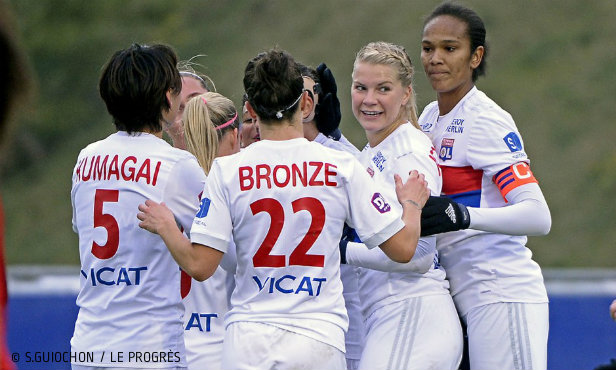 OL Women recorded a big 5-0 win over Olympique de Marseille and warmed up perfectly for their top of the table clash at home to Paris Saint-Germain in the next round.

This Saturday, OL Women travelled to Martigues to take on Olympique de Marseille, in Week 10 of the Women's D1. An Olympico A clash of opposites with Reynald Pedros' side sitting top of the table and Christophe Parra's girls down in second-from-bottom.

OM are yet to win this season and things didn't change against the defending champions. With OL president Jean-Michel Aulas in the stands, OL made a flying start. Camille Abily corner found Lyon captain Wendie Renard to open the scoring (10’, 0-1). Lyon were right on top, with Marseille's first shot of the match coming on the half-hour, but it remained 1-0 at the break.

But it didn't take long after the restart for OL to extend their advantage. Ada Hegerberg scored from Shanice van de Sanden pass (49', 0-2) and got her second from Amel Majri's corner (55', 0-3). Moments later Lucy Bronze got her name on the scoresheet with a header from another corner (58', 0-4), before Kheira Hamraoui, who had only just come on, finished off a superb team move (69', 0-5).

The win sees OL further cement their place at the top of the standings and prepare in style for their next game against second-placed Paris Saint-Germain - 3-0 winners over Bordeaux - at the Groupama Stadium.