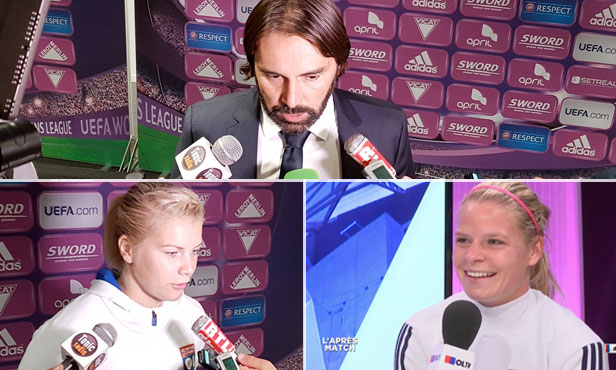 The president, the coach and the Lyon players stopped by the OLTV mic to share their thoughts after their big win against Medyk Konin (9-0).

“Our first twenty minutes were a bit mixed. We’re pleased. We needed to enjoy ourselves on the pitch in order to entertain the fans. We’re happy that we scored goals without conceding any. We have a lot of attacking strength and we saw it tonight, we need to carry on like that.”

“This match wasn’t a success only because we won but also because we showed plenty of quality. We have an attacking, team-oriented approach. We’re happy for Montpellier also qualifying. We now have two French teams in the competition. We’re attracting the best European players but we’re also training young players who will become the backbone of the France team in the next world cup.”

“When we dominate the way we did, we end up with a lot of dead balls and that’s how I managed my hat trick. We played well as a team despite twenty tough minutes. We grew more dominant after that  and everybody pitched in, which was good. The main thing was to get the job done today. We were keen to give a good account of ourselves for the fans after having lost our last match at the Groupama Stadium.”

“We didn’t play well in the first few minutes. We scored that first goal and we got into our rhythm after that. We finished well with plenty of goals. We feel good playing at the Groupama Stadium. We need to stay focused and to work hard.”

“This is a big score and there was plenty of action. The result and way we won are positives. We wanted to go for it at the Groupama Stadium and we did well by getting on top of our game. I would’ve liked to go off with a goal like all the other forwards but we achieved the more important things.”