Fernando Marçal: 'I was happy to play with Guingamp but I hope we win this match that's special for me.' 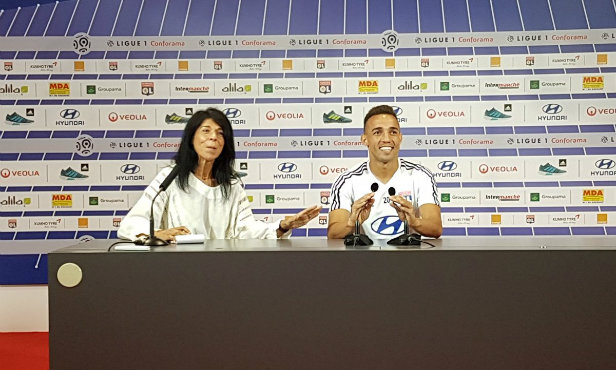 A few minutes after the day's training session, Fernando Marçal and the Lyon coach were at the press conference on Friday to talk about the league's resumption after the international break, which is set to take place for Lyon at the Groupama Stadium.

THE MATCH AGAINST HIS OLD TEAM

“This is a special match. I was happy playing for Guingamp but I hope that we win this match. Guingamp’s the club that opened the door to Ligue 1 for me. It’s a club that is still in my heart. All of my family loves Brittany. But I’m fully aware that Lyon is a totally different scenario. There’s a lot expected of you here. Guingamp is a French club, Lyon is a world club. They have completely different approaches to training and I hope that Bruno Genesio’s tactics will outdo Kombouaré’s in this encounter.”

HOW HE'S SETTLING IN

“I feel good. I’ve arrived at a club with some good people. They’re a good bunch. It already feels like a family. We need to keep the vibe up, most of all with Memphis, because the fans really appreciate action down the left flank. We’re still at the top of our game.”

HIS START TO THE SEASON

"I’m never satisfied. The first few matches helped me find my feet. I came here to win trophies but also to get into the national team. I need to keep playing well. I have to do a lot more. My main aim is defend well and concede as few goals as possible. I also want to help my team to score. I’m Brazilian so I’ll always look to attack.”

“Every match reminds me that I need to compete for my place in training. There’s a lot of competition. Ferland Mendy played well against Nantes.”

“Tanguy Ndombele is out for Sunday after hurting his shoulder. Cheikh copped a knock to his ankle yesterday in training and is also a doubt. All the international players have come back in time. Maxwel Cornet and Bertrand Traoré were the most tired but they’ve recovered well.”

“We’re professionals. Everybody’s 100% motivated to win every match. This is the only side we beat three times last season. This is a well-drilled team that plays fairly deep and pushes forward with both pace and passing. We’ve often been caught out on the counter and this will be a good test to know if we’ve progressed in this area. I think that we have. I’m asking Lucas to stay back in a shoring-up role, as a guard in front of the defence, to hold them back from attacking in numbers. We have a better balance. I have a lot of respect for coach Antoine Kombouaré who has a lot of experience.”

“We’re well prepared. We have to look at performing well in the three matches and to keep players fit. I have a full squad at hand, so I basically have two full teams to choose from; I have 24 players fit to take the field today. So there are some choices to make. I think that Christopher Martins Pereira will join Ligue 1, like a few other young players have this season. There are a lot matches to play and at some point, Nabil Fekir won’t be available and we’ll have to adopt a new system of play even if I reckon that Houssem Aouar is the same sort of player as Nabil. We actually need to have this large a squad. The competition spurs the team on to a higher level.”