Bruno Genesio: ‘On the whole, we’re pretty happy with our start to the season’ 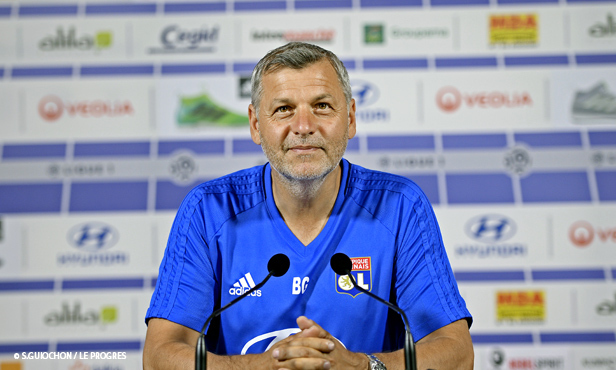 Bruno Genesio talked to the media in the lead up to the second trip of the season to Nantes, this Saturday at 17:15h.

“Sergi Darder is suspended, we hope for only one match. Fernando Marçal, who hasn’t fully recovered from a slight thigh injury, won’t be travelling with us. I’ll call Ferland Mendy in.”

The start to the season

“We’d have nine points out of nine if we’d won everything but given the quality of the teams we’ve played we’re going OK in terms of points. Also, the new players have been settling in well. There’s still plenty of room for improvement but, on the whole, we’re satisfied with things so far.”

“I’m staying positive about the Bordeaux match. We were all expecting to get the three points but there’s plenty of cause for satisfaction that we shouldn’t ignore. We need to keep going with things that have worked well rather than over-analyse bad results and the number of points taken. We need to focus on our game. I think that even though we conceded three goals against Bordeaux, we have a winning mentality. I get the feeling that we’re a team who’re very keen on winning the ball. We need to be more consistent with holding possession, though. We’ve scored four goals in three matches, including three with ten men against 11. The second goal against Bordeaux could’ve been avoided. The other one was on the counter and the last one was down to Nabil Fekir’s talent. But even with only ten, we were solid.”

… and the one against Nantes

“The Nantes match is vitally important because if we do well there we’ll be in the top three and that’s our goal. But what we hope for is to continue to work on our formula and improve our game. That’s what we’re trying to do. The squad is becoming a more effective unit because everyone’s helping out in defence. We’ve found a balance at this level and now we need to keep it going. We’re on the right track.”

“I wouldn’t say that this is the new Nabil Fekir: I’d say it’s the same one we knew before he was injured but with more maturity. Like the staff and the other players, he learned from last year and that’s allowed him to play at a higher level. He’s put in a lot of effort to come back. He’s the team captain, he’s shown the way. I hope that he’ll be on the team sheet this afternoon because he deserves it. And there’s a number of things that make me say that. He’s physically fit, he feels better about himself and has bounced back to his best. Since the start of the season, I’ve been completely focused on the squad. There’s been a lot of change and everyone’s reflected honestly about their performance last season. If I give him the armband, it’s because he has been a model on and off the field.”

“He’s a different sort of player from Rafael because he’s a bit more defensive. I think he did well in his first start. He needs to be more alert at certain times and when we’re on the attack, but his performances have been encouraging.”