Bruno Genesio: ‘The players deserved better given the team spirit they showed’ 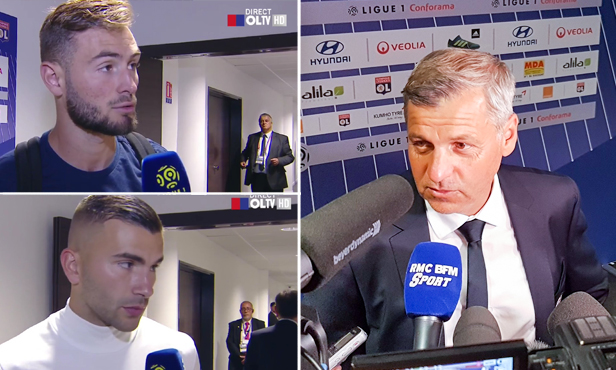 The Lyon coach and his players took turns at the OLTV mic to share their thoughts after the draw against Bordeaux.

“I’m frustrated and disappointed. The players deserved better, we deserved the three points. The turning point of the match was the red card. Bordeaux’s second goal could’ve been avoided. It put them back in the race. Our opponent’s talent also made the difference with the third goal… We put in a huge effort and we lacked a bit of focus towards the end of the match. We conceded three goals and let two points go right from under our noses. We need to get the three points at Nantes. We were fully expecting to take nine points.”

“It’s very frustrating because we had the match in hand. The third goal caught us unaware. That’s how it goes. We were a bit tired toward the end. The sending off didn’t help. We didn’t manage to defend our lead… Your goal? I saw the keeper off his line. I pulled it off. I didn’t hesitate. I’m not really in line for the national team. I prepared well and I feel good in the team.”

“After having lead for the whole match, they caught us at the end. It’s pretty hard to cop. I thought we were home after our third goal. We were stretched with only ten men. We were up against it and we ended up cracking. We needed to be more solid at the end of the match. We were all ready to get a third win on the run. We’ll do well to learn from this and go and get a win in Nantes next weekend.”

“We’re pretty frustrated. We went into the dressing room in the lead. We knew we’d be up against it in the second half. I believed right to the end. We tried to play as a unit. With ten versus 11 for a whole hour, it was very tough, especially against a team like Bordeaux. I’m hoping our morale didn’t take too much of a blow tonight. We would’ve loved to get three out of three wins… Malcom’s goal was amazing. I missed my shot by only a bit. There were some great goals tonight, the forwards were in top form… We need to keep it going because we showed some good team spirit.”

“It’s always hard to see a player pull up. We still don’t know about Marçal… We knew about Nabil’s ability, he’s a genius. The question is, is he really left-footed? Costil wasn’t that far off his line, so it took a deft lob. Nabil showed great skill and awareness because he won the ball and was offensive-minded enough to look up straight away. He made a big difference today and he knows how to keep possession when it counts.”