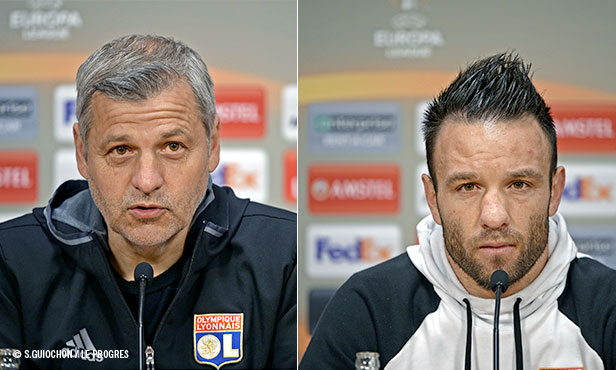 The OL coach and his midfielder spoke to the press a few minutes before the training session on the pitch at the Amsterdam ArenA.

“Fitness news? Tolisso will be fit for tomorrow. Lacazette is doing well but I think that it will be too soon for him to be there. We wanted to bring him along with the squad because we thought it was better for everyone. Nabil Fekir is capable of doing what Alex does, to make things happen, to keep the ball. So we will play the same as we usually do… We need to keep our chances for the return match in mind and play our game, like we did at Besiktas. This will be a very open game. We’re going to play a very good team who play very attacking football with quick surges forward. We have to disregard everything that has been said about whom we drew. Tomorrow’s result isn’t that important, as everything can turn around in the return match. I try to keep my players from being too confident… Ajax is a great club and we learned that quickly when we saw the trophies in the stadium. This is a team that made me dream when I was young. There are some big names. The playing philosophy is still going. This a great club with a huge history. It’s a pleasure to play a European semi-final here.”

“It’s great to be in this last stage. Not many people wanted us here. We’re going to play a very good team and we’re expecting a tough match. They have a lot of talent in their line-up and they’re unbeaten at home in the Europa League. We’ve been through some big moments in this competition. We still need to show our effectiveness at this stage of the competition. We deserve to be here. We’re aiming to go right to the end now. The team showed a lot of character to qualify… Ajax is a great club with a great history. Some of their players have made their mark on the history of football. To play in a stadium like this is great. We all need to work hard to earn a good result here. We’ve come here to win. We’re well capable of causing them problems. But this won’t be a decisive match because there will still be the return leg at the Parc OL. We need to avoid overthinking, we’re going to play our game… It’s a shame we didn’t manage to do as well in the league because I think we’d be higher than fourth today if we had… Alex Lacazette is recovering well. It’s the coach’s decision. We know that it’s better to have him in the team, but we’ve also showed that we can play well without him.”