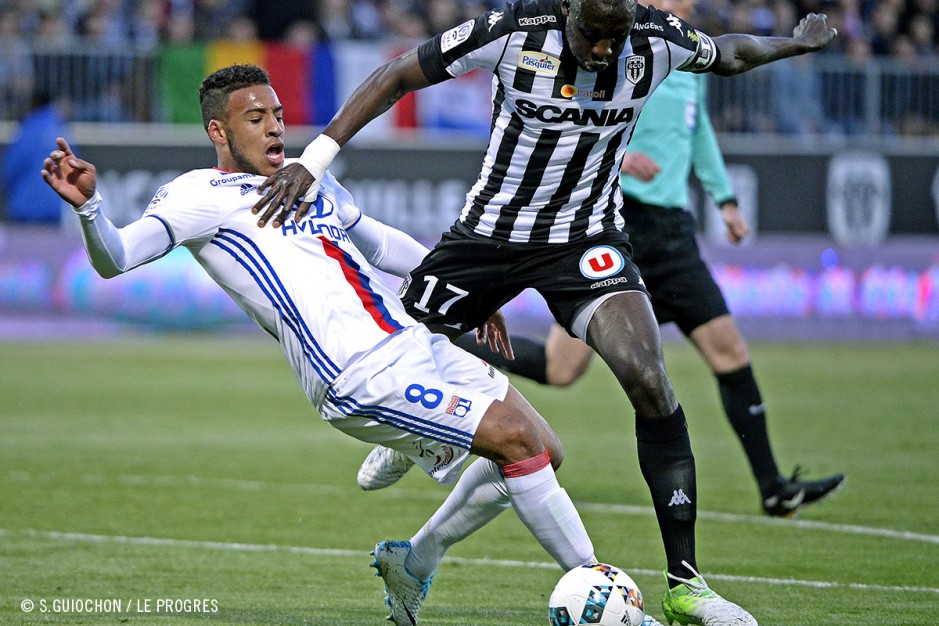 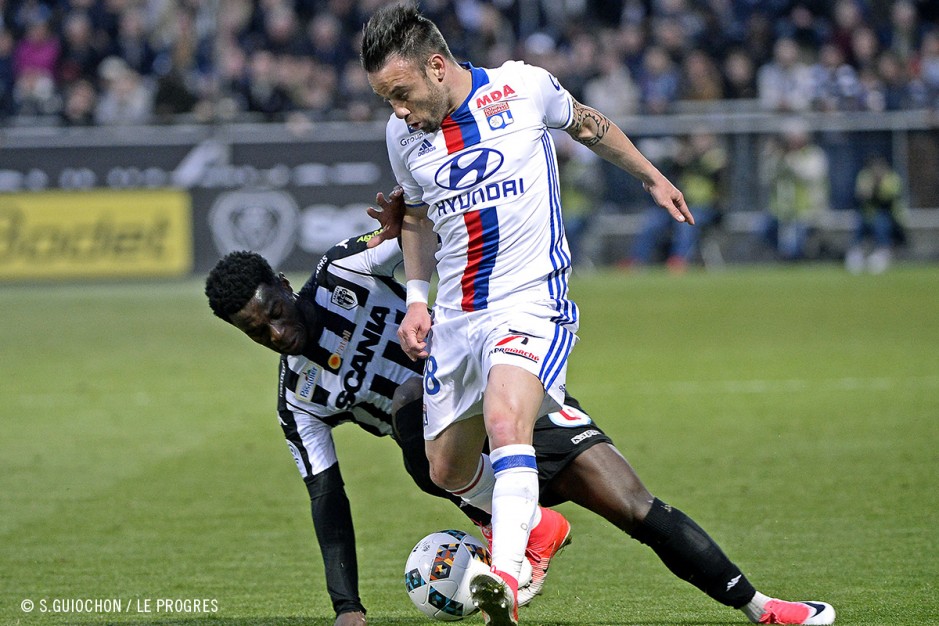 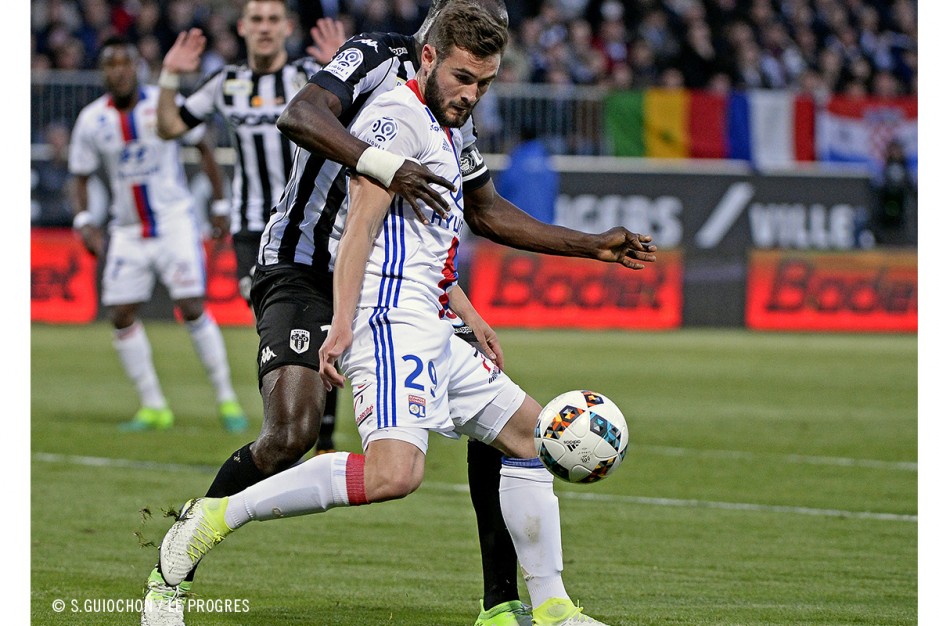 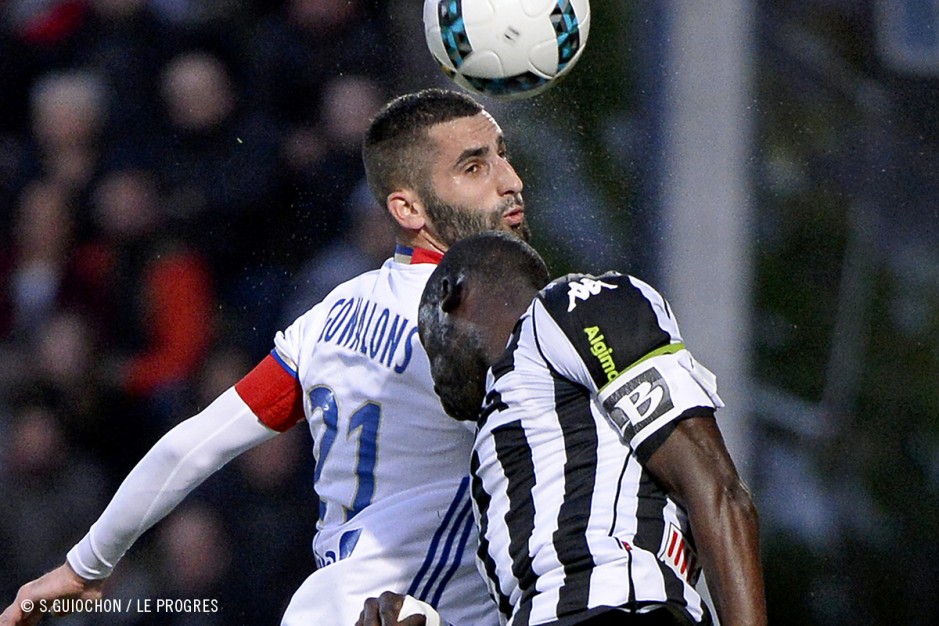 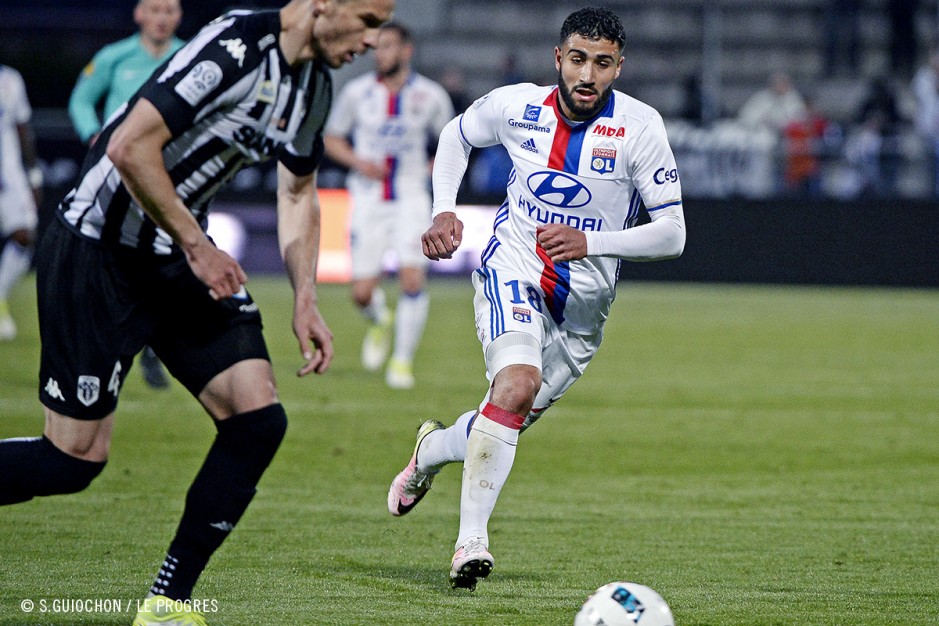 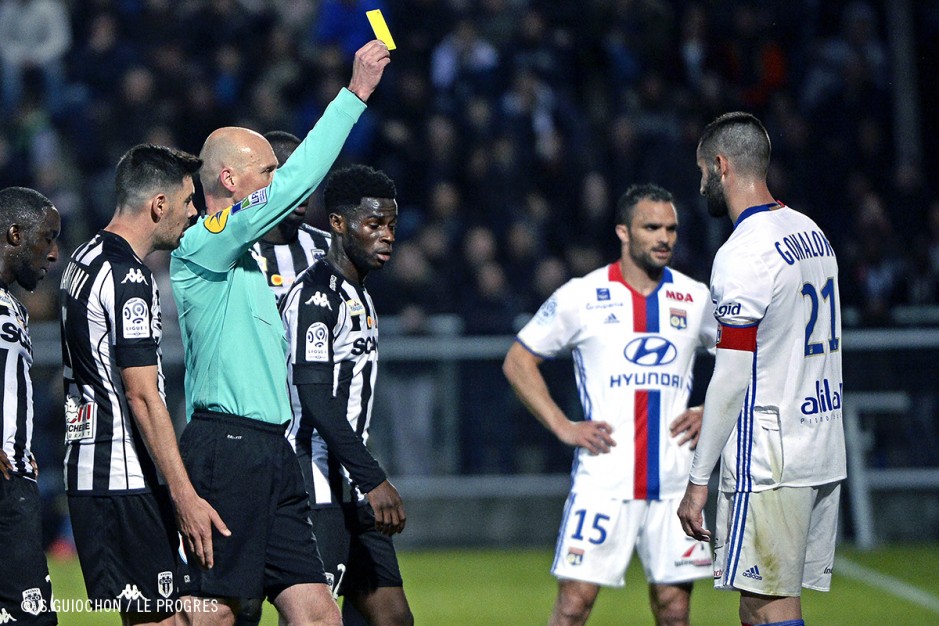 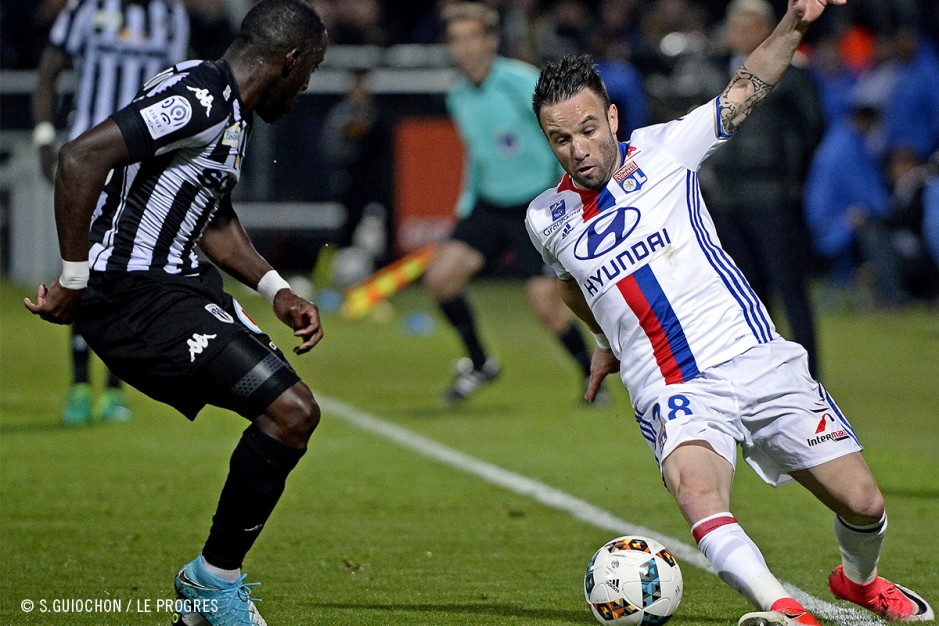 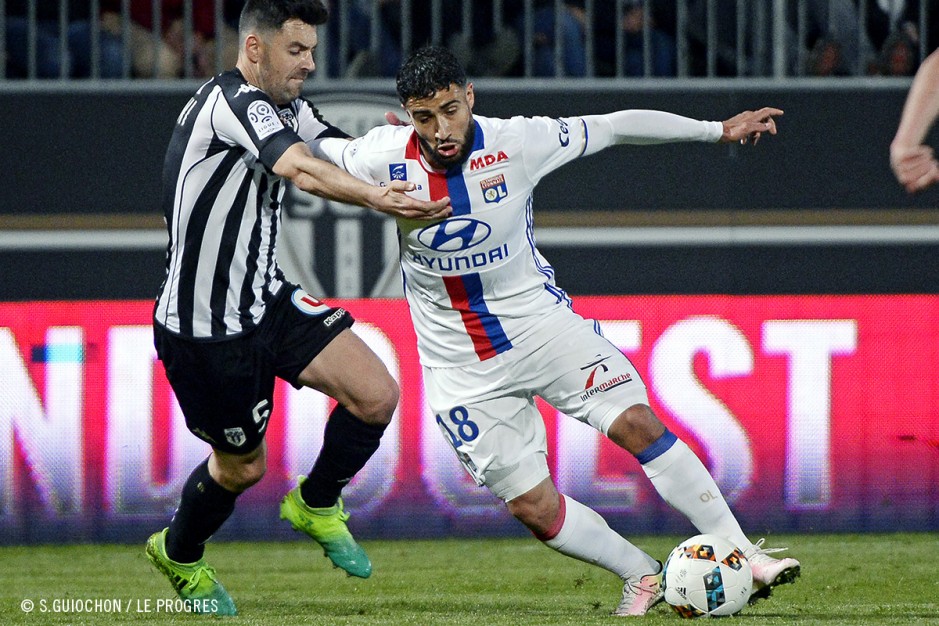 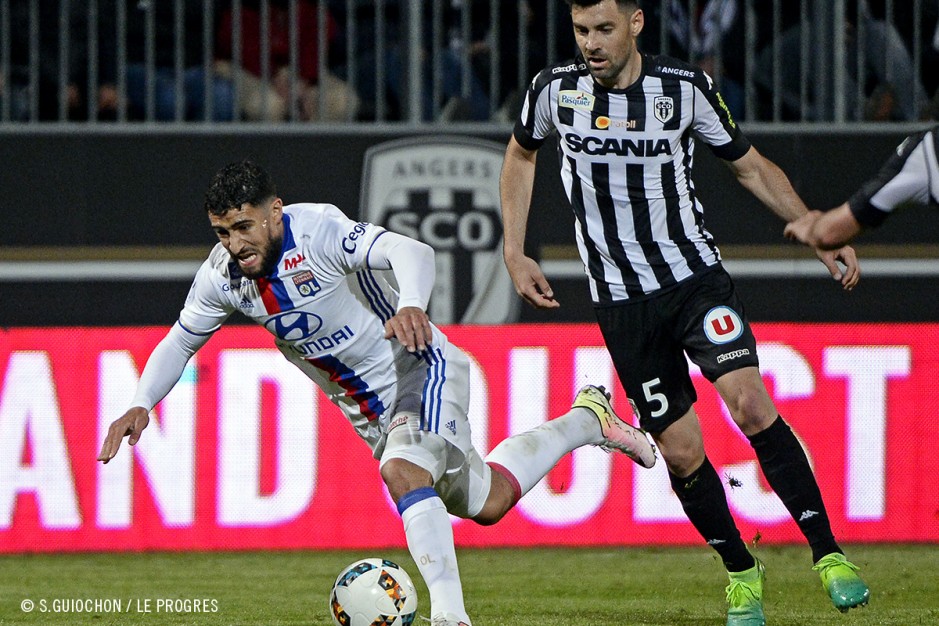 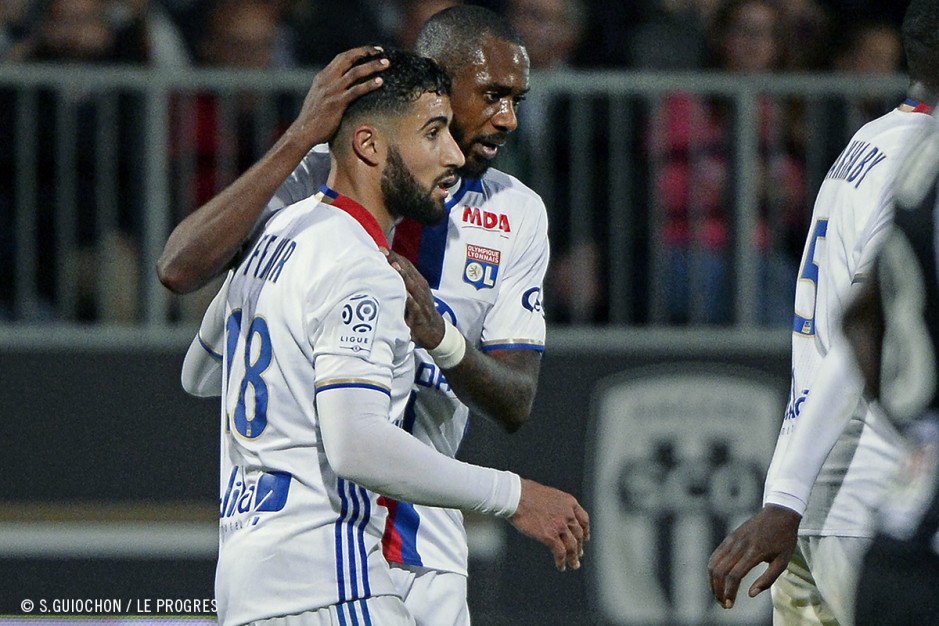 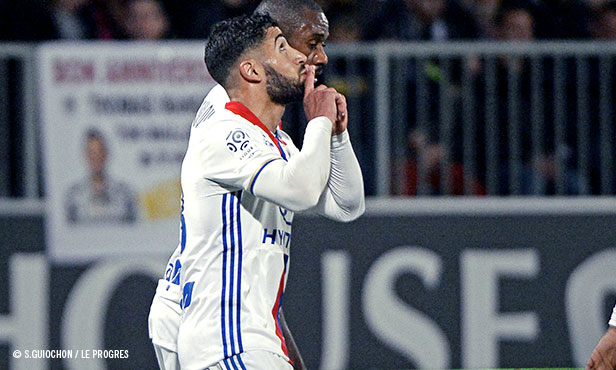 Having had a hard time of it lately, OL went to Angers looking for a precious win in the race for a top-four place but also for some positive preparation for their European semi-final in Amsterdam. The big blemish of the evening was Tolisso’s going off injured...

11’. Jallet makes a decisive intervention from under the feet of Mangani, who was about to shoot.15’. Lopes parries Santamaria’s shot from 20 metres.17’. Valbuena scores a lucky goal when a deflected cross bounces in off him. 0-1.18’. Lopes saves Diedhiou’s close-range shot.33’. Lopes makes a massive intervention to thwart Ndoye after Diakhaby’s weak back pass.41’. Fekir scores with a curling direct free-kick. 0-2.49’. Ndoye heads in from a corner. 1-2.56’. Letellier turns Valbuena’s shot away.58’. Manceau clears Diakhaby’s header off the line.74’. Toko Ekambi hits the crossbar.77’. Pavlovic is sent off for a reckless challenge on Tolisso, who’s forced to go off injured. 90+5’. Ghezzal’s shot is turned away by a defender’s hand.

A win was just about the only option on this trip to Angers: as much for jockeying for fourth place as for preparing for the European semi-final in Amsterdam. With Memphis and Lacazette left out, the coach didn’t hesitate to start his ‘usual team’. It was a set-up that was marked early on by difficulties in possession and build-up. Angers took advantage of their opponents’s loose balls to threaten on several occasions. But it took little more than a half-chance for Lyon to open the score against the run of play. However, Valbuena’s lucky goal at the quarter-hour mark didn’t change the run of play and Lopes had to busy himself for Diedhiou then Ndoye. His Angers counterpart was once again slightly uninspired when Fekir unleashed his free kick. So, just before the break, Lyon found themselves with a surprising two-goal lead.

No more than three minutes passed before Ndoye leapt highest to head in. This reduction in their lead spurred Lyon, as demonstrated when they created two decent chances for Valbuena and Diakhaby. But the Angers players hadn’t given up the ghost and they pushed on. Toko Ekambi’s effort bounced off Lopes’ crossbar. Pavlovic saw red after he forced Tolisso to be carried off on a stretcher… SCO didn’t lay down their weapons but, in the end, were unable to stop Lyon from picking up three precious points to retake fourth place - at least until the Bordeaux-Dijon match -  and boost their confidence five days out from their big European meeting against Ajax.

Maximum efficiency in the first half

Only one ‘true’ shot for a return of two goals in the first half… Lyon’s conversion rate was too much for Angers, despite the latter’s domination. Bruno Genesio’s players weren’t displeased about the scenario in which they had trouble containing the opposition attacks but also managing to put some plays together before the break. They benefited from two errors from the SCO ‘keeper, who parried a cross onto Valbuena, who was happy to see the ball bounce home off his knee, then let Fekir’s free kick spin past him. In contrast, and despite being called upon many times, Anthony Lopes was once again impeccable in keeping his side out of trouble.

3
Failing to dominate this trip to Angers, Lyon nevertheless managed to secure the essential: victory. A rare highlight since the start of the calendar year. This win is effectively only the third one on the road in 2017, with 12 away matches having been contested in all competitions. Apart from this win at Angers, a 4-1 win at Alkmaar in the round of 32 of the Europa League and a 3-0 victory at Metz (replayed match), the ledger is two draws and seven losses.

“It was really tough tonight, especially in the first half. We led against the run of play. We were outdone for commitment, in going in for the ball. We had the good fortune to score from a freak goal then from a free kick. After the break, we conceded that goal and were no longer safe from an Angers comeback. They slowed down a bit in the final quarter of an hour. I was amazed at Angers’ ability to put such an effort in. There was huge intensity, it was on the level of a European Cup. We had to respond and we did… Corentin Tolisso’s injury? We don’t think that his ankle is twisted but what is worrying was his reaction. He was carried off on a stretcher.”