Sarah Bouhaddi: ‘It’s a big relief because we came up against an extremely good team’ 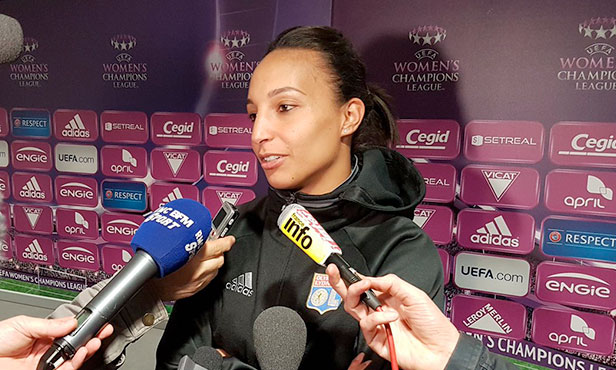 Jean-Michel Aulas, Gérard Prêcheur and their players stopped by the OLTV mic to share their reactions to the Champions League match against Wolfsburg.

“It was a difficult match. Wolfsburg won the physical and tactical battle, even if we were technically better. We should consider ourselves fortunate to have qualified. The match was pretty stressful. We’ll need to recover because there is still a way to go. We need to get straight back into it. The squad has to be even better. We need to reflect on all this but we should also appreciate our performance. We were well prepared and didn’t need to push ourselves too hard. We’ll be up against a big team in the semis but I hope we’ll be going to the final because that’s our aim, given the effort we’ve put in… Our goal is also to create a dynamic that further establishes women’s football.”

“We saw a very intense match tonight. Given the high level of the tie, it was like a final before the final. We knew it was going to be a hard match. We needed to stay solid, with everyone pitching in. But I did not expect it to be so difficult tonight. We played a team that had to score, when we’re used to playing teams that do nothing but defend. Wolfsburg have are able to go in hard for the ball and they made us play in an unfamiliar way. I asked my players to take more control and to push the opposition back. We were forced to play long. Well done to my players for being able to play like that. The Germans went beyond their limits tonight. I don’t know of another team with such physical and mental strength… We found Sarah Bouhaddi in big-match form tonight. She was decisive in the two legs and played a big part in our qualification.”

“We struggled but we qualified. It was a difficult match. Wolfsburg are a very good team. We put in a huge performance. They played with a lot of intensity for the entire match. It’s also important to get through in this manner, because it will help us prepare for the next match.”

“It’s a relief because we were dealing with a very strong team. The most important thing is that we qualified. The two goals in the first leg made the difference. The match was tougher tonight. The players did great job. There was happiness and relief in the change room. We’re pretty tired… I tried to get the job done and keep a clean sheet.”

“We defended well. We deserve to go through. We showed a different side of ourselves today. It wasn’t our best game but it was important to qualify. We kept playing as a team, we didn’t give up.”

“It was a tough match, very physical… It took a bit of time for me to get into the game, to find my bearings and it wasn’t easy. I’ve had a fantastic first few weeks.”

“It was hard. We were able to show another side of ourselves, we really played as a team. We were solid defensively. We could have dealt with a few things better, but the main thing is we got through. The first quarters of an hour of each half were difficult for us. We came up against a very good team in Wolfsburg.”