Gérard Prêcheur: ‘A good perfromance that gives us a lot of satisfaction’ 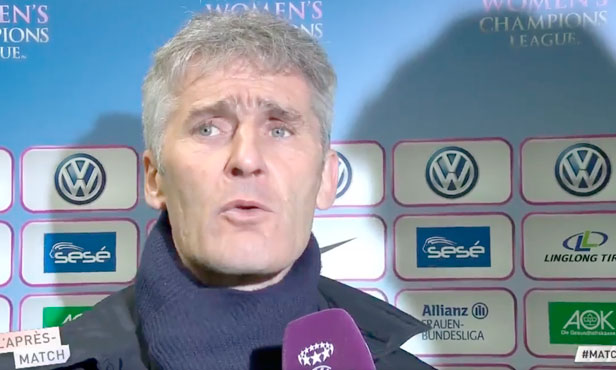 The Lyon coach, his players and Jean-Michel Aulas shared their thoughts with OLTV after their win over Wolfsburg.

“This was a good performance that gives us a lot of satisfaction. I’m pleased for the players who played a good match. Wolfsburg were quite attacking in the first half. Athletically, they’re a very strong team. We were pleased to get to the break with a nil-all scoreline. I knew that were getting into space more after half time. And we used that space well. Without playing brilliantly, we earned a two-nil advantage, so that’s really good.”

“This was a huge performance. We were in Germany against a very good side. It was tough. We need to remember that Wolfsburg could’ve led at the break. Gérard made the necessary tactical changes. Well done to whole team. We haven’t gone through yet, though; the Champions League is played over two legs. We need the public to get behind us next week, as befits a Champions League final. All the football amateurs should be turning up.”

“We were up against a big team. It was a very open match. We managed to convert our chances when they didn’t. We would have liked to score more. We’ll get the job done at the Parc OL to qualify.”

“It was a hard match, high-paced. They had plenty of chances… my goal was deliberate. I wanted to cross, even if I always had an eye for the goal. So much the better. With my experience under my belt, I have much more confidence than before. I try to make the most… we’re not through yet. We’re counting on our fans to come out and support us.”

“I was really pleased to come back here. It’s next to my home town. We’re very happy to earn the win. We played a good match. Wolfsburg play a very fast game. They go forward quickly, they’re quite technical. It was a very tight match.”