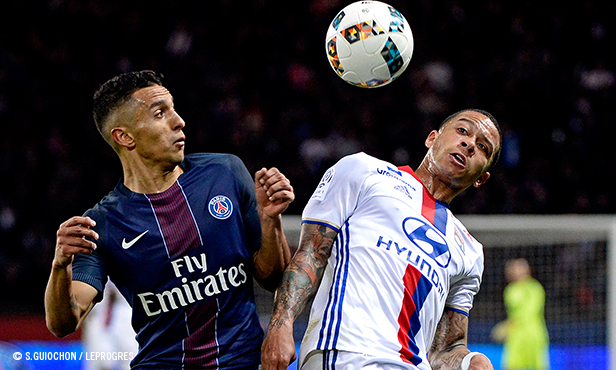 Three days after their European qualification in Rome, OL have gone own 2-1 to Paris. Having started the match well, Lyon were unable to protect their lead against a PSG team that became increasingly dominant. Lyon are now 14 points adrift of the top three.

6’. Lacazette scores from a Valbuena corner headed on by Rafael. 0-1.9’. Huge chance for Diakhaby to head in… but he hits the post.34’. Rabiot slots in Pastore’s cut back. 1-1.37’. Lopes makes a flying save to keep out Di Maria’s curling shot.39’. Memphis loses out in a one-on-one with the keeper.40’. Pastore sets Draxler up to slot home from near the penalty spot. 2-1.75’. Di Maria drags his shot just wide.

Three days after their happy trip to Rome in the Europa League, Bruno Genesio’s players experienced another shock. Tired legs?  Obviously not, since they came out with guns blazing in this tough trip to a PSG with a point to prove. Lacazette opened the score from a corner after only five minutes of play. Full of belief and intensity, OL continued to press Paris where it hurt, with several dangerous dead-ball situations and Diakhaby’s hitting the post. PSG tried to lift their heads but they didn’t manage to cause Lopes much trouble… until Rabiot’s equaliser from his team’s first shot on target. Then, a few seconds after Memphis blew a chance from a counter-attack, Draxler left the Lyon keeper with none. A galling way for the latter and his teammates to have to head to the change room.

Lacazette, who took a knock, was quickly replaced by Darder before Ghezzal went on for Valbuena, to lend a bit of freshness. OL played on as before but didn’t manage to create any decent chances. A false rhythm had settled in, with PSG clearly in the ascendancy, even if Lyon were still in scoring range 20 minutes from the end. Di Maria came just centimetres from putting the matter beyond doubt. Having notched up his 324th match to reach tenth in his club’s appearances ranking, Max Gonalons and his teammates lacked the requisite vigour to go looking for something out of this match and thereby take advantage of Nice’s draw. The top three league places, now 14 points from Lyon’s grasp - they have a match in hand, though - have once again gotten farther away with two weeks to go to the international break.

Just when PSG were getting back on top, Lyon had a chance to retake the lead. Released into space by Lacazette at the end of a quick counter-attack, Memphis found himself one-on-one with Trapp and tried to dribble rather than shoot. Trying to get around the onrushing keeper, the Lyon number nine lost his balance and at the same time lost control of the ball. The referee seemed to hesitate but in the end did not whistle for the penalty. A chance that would likely have seen Lyon ahead at the break had it not been squandered, something Paris didn’t do in their next attack...

It wasn’t to be this time. Bruno Genesio’s men didn’t quite manage to string their best league run of the season together. Before this trip to Paris, Lyon had gone four matches unbeaten, with a ledger of three wins (Dijon, Metz, Toulouse) and one draw (Bordeaux). But they flew too close to the sun tonight at the Parc des Princes and failed to better the run they put together between 30 November and 21 December with four wins on the trot (Nantes, Rennes, Monaco, Angers).


“It’s a shame because we didn’t see a great Paris performance tonight. They had trouble with our approach and our willingness to play high up the pitch. We harried them well at the start of the match and they weren’t in it for about 25 minutes. We won the ball high. Pastore’s repositioning himself between the lines and his intelligence hurt us and he was the creator of the two goals. We had a lot of work to do in the second half but the Rome match had taken something out of us. We lacked that bit of freshness to get back into the match. We didn’t offer enough going forward and didn’t switch to the flanks as much as we should’ve.”