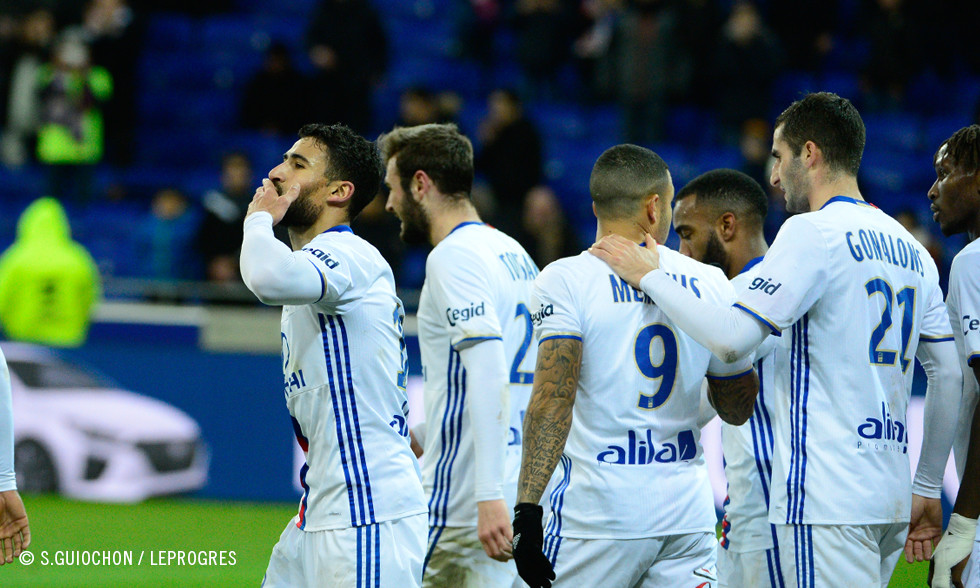 A few days after their defeat in the derby, Lyon have lifted their heads up to thrash Nancy. Valbuena, who went off injured, Lacazette, Fekir and Memphis all scored. Thus, OL have stopped their run of losses at three with a convincing comeback.

In front of a small crowd and in a rather heavy atmosphere, the match began at a slow pace. While the first chants were still being heard, Lyon put together the first chance, which Cornet failed to convert. Yanga-Mbiwa confirmed that his team's foot was on the gas with a header that went just past Chernik's post. Just as he was about to go off with an injury, Valbuena fired off a magnificent curling shot that went inside the far post, his last action of the evening. Another high-level piece of play came soon after, this time from Fekir's right boot when he lifted the ball over Chernik to double the score just before the break.

OL didn't wait long to widen the gap and get themselves clear of any possible Nancy comeback. With a penalty awarded for a foul on Memphis, Lacazette scored his 19th goal of the season in Ligue 1. Not long afterwards, the Dutch recruit was decisive for a second time when he slotted the ball between Chernik's legs to open his OL account. Lyon managed to lead until the end of the game, one which they largely dominated. It was a deserved win that puts an end to OL's run of defeats, which totalled three in all competitions.

A front line firing on all cylinders!

Kept quiet in the derby at Saint-Etienne last Sunday, the Lyon forwards rediscovered their voice. With the exception of Maxwell Cornet, who also offered a lot in attack, the forwards all found the net. Mathieu Valbuena, with his last kick of the game before going off injured, Nabil Fekir, Alexandre Lacazette and Memphis, with his first goal in the colours of Lyon, all distinguished themselves by scoring. Nabil Fekir and Alexandre Lacazette also provided assists, and Memphis earned a penalty. This is a real confidence boost.

Lyon's defenders also came to the party. With their ranks having been somewhat depleted for a few weeks in this area of the pitch, OL haven't been able since the start of the year to finish even the least significant league match without conceding a goal. Lyon  conceded three goals at Caen, one against Marseille, two against Lille and two at Saint-Etienne. The first clean sheet of 2017 is most welcome.

"Victory was the only thing that was expected. We did it in style but don't let's get carried away. We started moving forward again, and that's great. There were many positive aspects to this match. We took three points and scored four goals. That's satisfying, like Memphis's being more at ease... The atmosphere was strange, almost unsettling. The context was rather pointed. Gonalons had gone to see the supporters. It's good because it clears the impasse and opens up a dialogue."