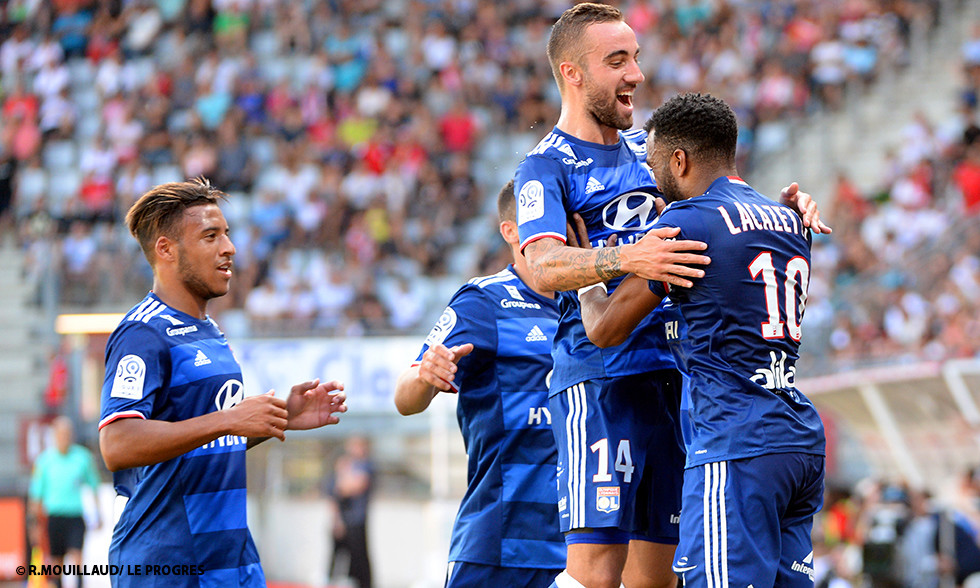 For their first L1 match of the season, Lyon bagged a 3-0 win in Nancy. After 25 sluggish minutes, they managed to accelerate at the end of the second half thanks to a Lacazette double. The striker went on to get a hat-trick and make certain sure of the three points.

28’. Lacazette's free-kick turned away by the opposition 'keeper.

33’. Lacazette scores after Darder's attempt was parried into his path by Ndy Assembe 0-1.

44’. Lacazette latches onto a long clearance from Lopes and scores again 0-2.

45’. One-on-one with the 'keeper, Cornet comes off second best.

90+3'. Lacazette stitches up his hat-trick thanks to an assist from Ferri 0-3.

OL made a successful return to league duties… despite a not-so-impressive start to the match. Struggling for the first 25 minutes, they were pushed around by a Nancy side full of running for their return to the top flight on their own synthetic pitch. Bruno Genesio's men got the upper hand, though, and kept it as they pushed forward and proved clinical in front of goal. Lacazette bagged two before the break , and OL were calmly on top throughout the second term with Lacazette putting the cherry on top with a late strike to complete his hat-trick.

Water… and wise words during the drinks break

The drinks break wasn't just for players to cool down… the break half-way through the first half gave Bruno Genesio as great opportunity to gather his players and say what needed to be said after 25 underwhelming minutes. The effect was immediate, and it was a different OL side that re-took the field. Sharper and more imposing, OL quickly had a great chance from a free-kick before Lacazette twice made the most of the space afforded him by the Nancy defence.

Anthony Lopes provided the second assist of his Ligue 1 career. Not bad for a 'keeper playing his 113th match in France's top flight. Pedretti tried to pick out Robic with a long pass, but the OL glovesman anticipated well and booted a long clearance up the field. Lacazette was on the end of it, and with Muratori missing his attempt to bring the ball down, the OL man made no mistake. On December 21, 2014 in Bordeaux (0-5), it was Nabil Fekir who converted Antho's long assist.