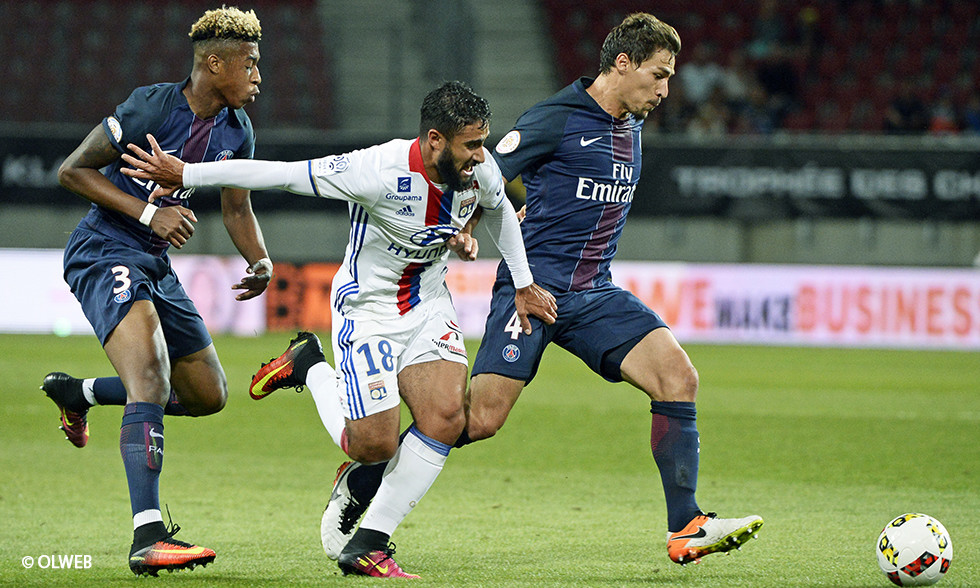 The bar was just too high for OL, who were out-classed and quickly knocked out by Paris' swift attacks, especially in a very difficult first half.

9' Pastore scores from a Kurzawa cross 1-0

19' Lucas scored after a goal-mouth scramble 2-0

87' Tolisso scores a header from a Jallet cross 4-1

Once again OL will have to wait until next time to win the club's eighth Trophée des Champions. After submitting to the Parisians last season in Montreal, the Lyonnais were once again outdone, starting seasons 2016-2017 off with defeat. However, the first few minutes from OL were full of promise, in keeping with the team's excellent pre-season performances in terms of controlling the ball and mounting dangerous offensives. In those early stages, it would have been tough to imagine that Lyon founder the way they ended up doing. The defensive lapse in the ninth minute, punctuated by Pastore's opener, was the beginning of the end and Bruno Genesio's men would concede another two before going into the break 3-0 down. .

Things improved after the hour-mark, with more shooting positions reached and more possession secured by OL. But Pastore and his teammates were impossible to contain and hammered the final nail in OL's coffin with a fourth goal at the beginning of the second half. Tolisso's goal was scant consolation as PSG claimed their fourth Trophée des Champions in a row.

Lacazette's being forced off injured

46'
It was perhaps the worst news of the evening. Alexandre Lacazette, who had shown some very promising signs early in the first half, did not come back out after the break. The OL striker was suffering from pain in his hip. Let's hope that it's not too serious and that OL will have their most dangerous striker back in action as the league season kicks-off away to Nancy on Sunday.

It's disappointing. We were expecting better than that. We didn't see the lads playing they way they had been in the pre-season, and we copped a hiding. PSG pretty much ran the show without having to try that hard. It's frustrating. The scoreline could have been even bigger. We made too many unforgiveable errors that gifted goals to our opponents. Of course we'll be pretty demoralised by this big defeat but we need to get right back on track. We have to get ready for Nancy. Our pre-season preparations were good, so we shouldn't throw the baby out with the bathwater even though tonight's scoreline stings."