OL beaten 4-1 in Reims to close out season 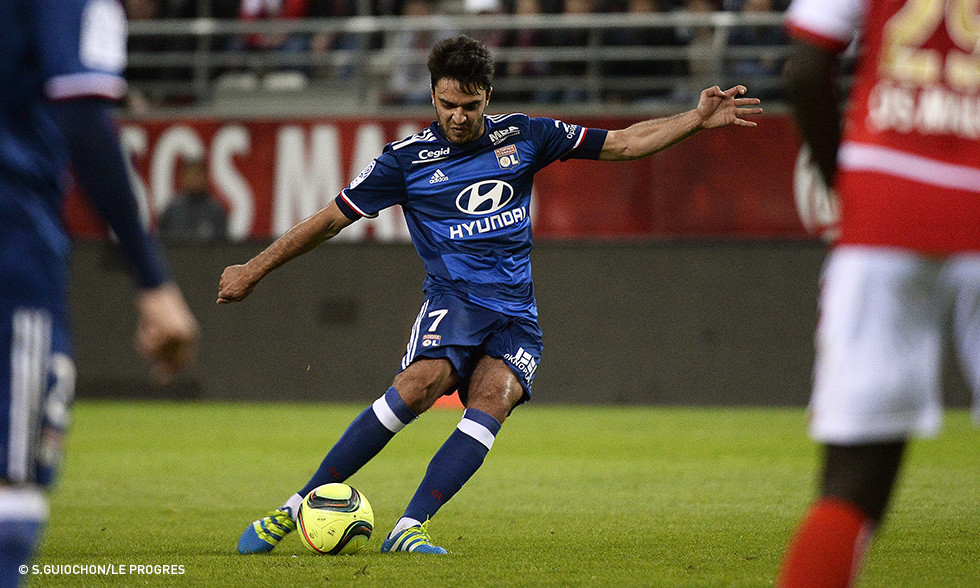 The heavy defeat in Champagne country is without consequence for OL, who had already secured second place. Despite winning handsomely, Stade de Reims were relegated to Ligue 2.

OL end their season with a defeat. Bruno Genesio's players fell to a Reims side who had to win to preserve any hopes of survival. The suspense was minimal in the second half, with OL already two goals down: Aïssa Mandi opened the scoring from point-blank range in the 14th minute after Sam Umtiti had deflected Diego's free-kick, and then in the 34th minute Diego turned scorer, sliding the ball under Anthony Lopes with a deft left-footed shot. OL could have been a goal up, Nabil Fekir spurning a gilt-edge chance (8') and could have pulled one back just before the break had Clément Grenier's powerful free-kick gone in under the bar instead of crashing back off it.

The beginning of the second half was pure catastrophe for OL, who conceded another two goals: Atila Turan tucked his shot in under the bar (51') and then Kyei converted from the spot after Umtiti had fouled Charbonnier in the area (56'). OL finally managed to save their honour as Rafael's cross, cleared poorly by the home defence, fell for Maxwel Cornet to volley home and claim his seventh goal of the season. The defeat is without consequences for OL, however, the club having already secured direct qualification for the club's 14th Champions League campaign.

He hadn’t started a match for OL since 29 August 2015, when he bagged a hat-trick against Caen in the 4-0 win at the Stade Michel d'Ornano in Week 4. The OL number 18 was fielded on the right-hand side of attack in Bruno Genesio's 4-3-3 formation. Banil could have marled his return to the starting line-up with his fifth goal of the season, but he fired wide with the left boot when he was one-on-one with Placide when the score was still 0-0. That was his only shot of the match before being replaced by Mathieu Valbuena in the 66th minute.

OL rounded out season 2015-2016 with 19 wins, eight draws and ten defeats. Sure, the club finished with ten points fewer than in the previous season, but Bruno Genesio's players had an incredible second half of the season, collecting 39 points in the last 19 matches of the campaign - after sitting in ninth place at the winter break.

I think we can be very very satisfied with what OL have achieved this season even though the first half of the season was pretty hard to swallow. OL imposed themselves as the best side in the country after Paris, and now the club needs to look at ways to take it further and mount a serious challenge on PSG. OL will work hard on transfers in the coming weeks. Personal interests cannot be allowed to trump those of the collective. We really want the youngsters to do well and gain some international experience in order to shine in national teams and in the Champions League. Tonight was my last match as an OLTV consultant and I am very proud to have accompanied the team for the last three seasons.

PSG celebrated their title with a walk in the Parc des Princes against Nantes (4-0), with Zlatan Ibrahimovic bidding farewell to Ligue 1 by beating another goals record with 38 Ligue 1 strikes for the season. Behind PSG and OL, AS Monaco secured third place with a 2-0 win over Montpellier. Also with an eye on Europe, Nice clinched fourth place, which takes them in to the Europa League qualifying rounds, while LOSC will be doing the same following their 1-0 win away to direct rivals Saint-Etienne. At the bottom of the table, Gazélec Ajaccio and Stade de Reims will accompany Troyes to Ligue 2 while Toulouse Football Club, 3-2 winners in Angers, saved their skins.