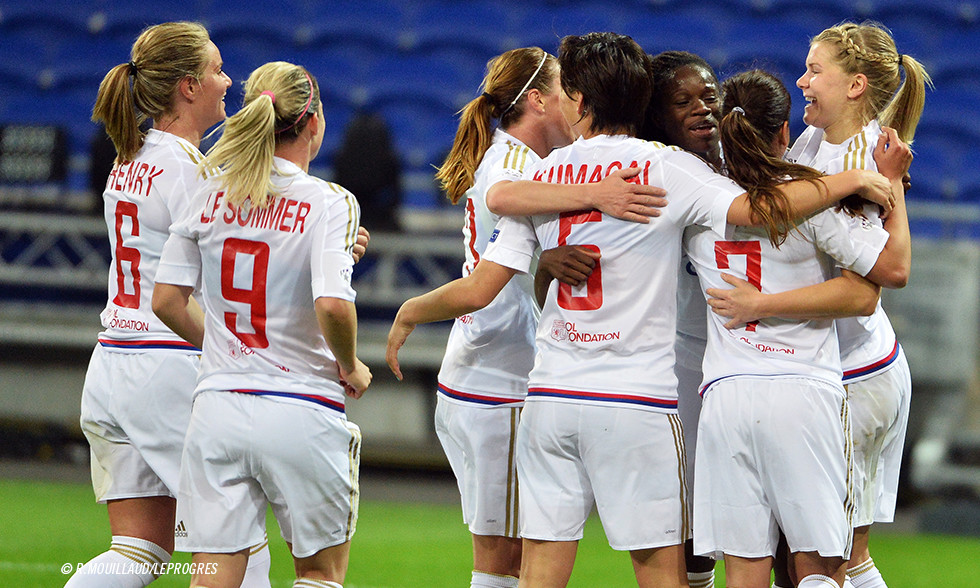 OL Women put on a real show for their first time playing at the Parc OL, winning 9-1. They hardly blinked as they brushed past Slavia Prague in the first leg of their Champions League quarter-final tie.

86'. Hegerberg hammers a powerful half-volley past the Czech goalkeeper! 9-1 for OL.

80'. Superb acrobatic overhead shot from Abily after Thomis had set her up! 8-1 for OL.

64'. Magnificent free-kick from Abily, who curls the ball into inside of the side netting! 7-1 for OL.

53'. Henry's header crashes onto the cross-bar. M'Bock follows well and dive to head home the rebound and complete her brace! 5-1 for OL.

39'. Lucky goal for M'Bock, who blocks the Czech 'keeper's clearance over the goal line. 4-0 for OL.

35'. Hegerberg has the simplest of headers into the back of the net after an inch-perfect cross from Abily. 3-0 for OL.

24'. After bringing down a long pass from Abily with a perfect touch, Le Sommer fired home from point-blank range, doubling OL's lead... 2-0 for OL.

23'. Le Sommer fires wide with a header despite finding herself in the ideal position.

19'. Necib opens the scoring with a superb shot across the Czech 'keeper. What a goal! 1-0 for OL.

17'. Le Sommer tries her luck from 20 metres. The opposition 'keeper drops well to turn it wide for a corner.

10'. OL are dominating possession but for the moment are struggling to threaten the Czech goal.

1'. After a minute's silence as a tribute to the victims of the Brussels terror attacks, Prague kick this quarter-final off.

A first since the 2013 campaign… it had been two seasons since OL Women had made it to the Champions League quarter-finals, the Lyonnaises falling victim to Potsdam and, last season, Paris in the last 16. It was also their first time playing at the Parc OL, Gérard Prêcheur's players celebrating a return to the quarter-finals by christening their new home in the Décines district of Lyon. No doubt Camille Abily and her team-mates had their hearts set on putting on a show for their fans, but the most important thing was to stake a strong claim on a place in the semi-finals ahead of the return leg in the Czech Republic next week…