Without the slightest hiccup 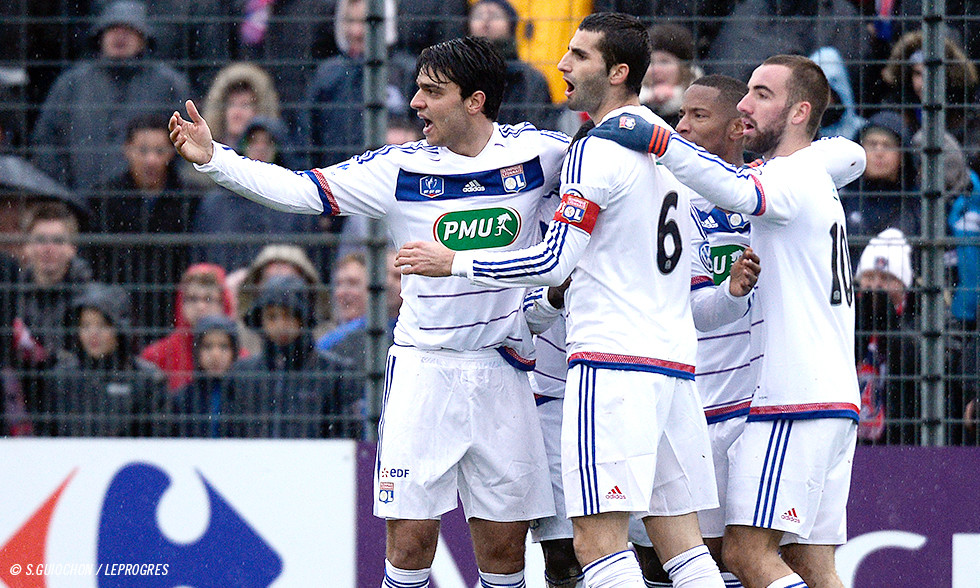 With a lot of drive, determination and lucidity, Lyon left Limoges no chance. The complete domination was rewarded by seven goals - a great way to get back in the swing of things before a completely different kind of clash next weekend.

The conditions were difficult… rain, wind and a greasy surface. It started very well for Lyon… a Gonalons shot was blocked by a defender and then by Cornet, a snooker-like sequence that beat the Limoges 'keeper (3'). The Lyon captain cam close to finishing his own goal but his header went wide. Lyon shots, corners and crosses rained in but the precision finishing was lacking as Beauvue headed narrowly wide and Ghezzal saw his attempt easily saved by Monteiro. The OL players made some poor choices in attack and Limoges started to gain some confidence and become more aggressive after a tough start to the match. But then Darder picked out a good cross for Cornet and, with a little bit of good fortune, the youngster doubled the lead (38'). Ghezzal went close to making it 3-0 with a superb curling shot that hit the post. Lyon hit the half-time break with a completely deserved two-goal lead after a dominant first half.

After a counter launched by Grenier and extended by Cornet, Beauvue calmly stroked past the Limoges 'keeper (50') and then Grenier's side-footed effort hit the base of the post as Lyon started to run away with the match. Limoges couldn't muster a reply. On the right of the area, Ghezzal curled another one and this time hit the target (56'). Cornet pulled up holding his hamstring and was replaced by Kalulu, who broke through the defence and set up Ghezzal for OL's fifth (61'). Darder, left to his own devices on the edge of the area, rifled a shot past Monteiro (71'). Tolisso, just seconds after coming on as a substitute, had only to tap the ball into the back of the net to finish an excellent team move. Lyon decided to keep their foot on the gas right to the end, and Monteiro prevented the scoreline from widening as he denied Darder and then Mvuemba.

Lyon were never troubled in a match where they really hit their straps in the second half, building on a solid first-half performance. They got the job done, and it was a great way to get back into the swing before a completely different kind of clash next weekend.