'I'm happy to be part of the plans at Lyon' 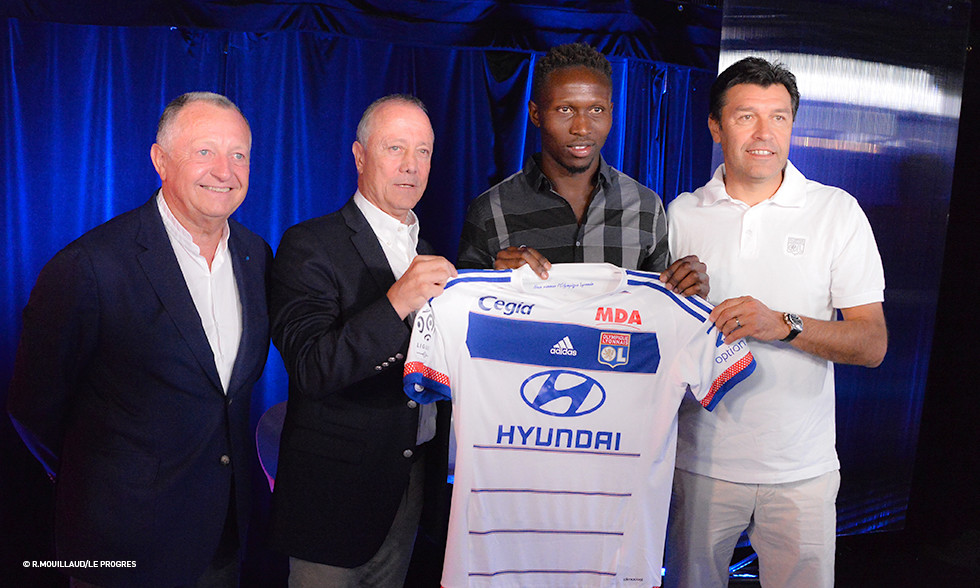 Mapou Yanga Mbiwa was presented to the media on Monday morning… he will wear the number 2...

President Jean-Michel Aulas, Hubert Fournier and Bernard Lacombe accompanied the former AS Roma player as he signed on for five seasons with OL (€8m plus up to €2m in bonuses). After making his name with Montpellier (122 Ligue 1 matches for two goals), with whom he won the Ligue 1 title in 2012, he moved to Newcastle (46 appearances) and then AS Roma (38 appearances including five in the Champions League).

JEAN-MICHEL AULAS
"Mapou arrives at the club at a very ambitious time but with a clear idea of what is happening. It's a big investment that shows how committed the club is to success. We've followed Mapou since he was at Montpellier but we couldn't swing a deal to bring him here and he went to Newcastle instead. His arrival proves once again our desire to be as competitive as possible in the league and the Champions League. What of B. Koné and Lindsay Rose? It's clear. At least one of them will be leaving before the close of the transfer window. For everyone else, we'll see what happens. There are still several transfer possibilities but we mustn't forget that it's possible to do too much."

The president also responded to a question about the increase OL's wage bill. "It has grown about 30%. We invested in extending the contracts of players who wanted to stay, and that involved significant expenditure given the club's ambition and state of the market. The duration of the contracts is an important factor when you make investments like these. We also invested €25m in new players."

HUBERT FOURNIER
"We’re very happy to welcome Mapou to the club. Just like the other new faces, he's a real plus for the squad, and the staff and I need to work hard to make sure we get the absolute best out of him; we're reinforcing our central defence with an experienced player. A solid defensive set-up is the basis for everything." Fournier was then asked a question on the potential departure of Yassine Benzia. "If Yassine leaves us, we won't need to sign anyone to replace him. We're counting on Maxwell Cornet, who had an excellent European championship with France's U-21 side. We also have faith in Aldo Kalulu. We hope he will add a new facet to our game. But Yassine isn't gone yet…"

BERNARD LACOMBE
"He's a player we've been following for some time. René Girard, who was Mapou's coach at Montpellier, told me a lot of good things about him. He reminds me of Marius Trésor. Mapou is fast and very athletic. He 's a good defender and fantastic reinforcement for us. We needed another stopper to help out Milan (Bisevac) and Sam (Umtiti)."

MAPOU YANGA-MBIWA
"I was expecting to come to OL. I thought it was just a rumour in the beginning. But then I spoke with the president and the coach, and they were very convincing. I had to give in… But I'm very happy to be part of the plans at Lyon. I'll give 100% to help the team."

How have your overseas experiences changed you?
"In England, I got to know about a physical style of play and the value of individual physical preparation. With Roma, I learnt a lot under coach Garcia. In Italy, you work a lot on the tactical side of things."

Did Euro 2016 in France have a bearing on your decision to return to your homeland?
"With OL, we have the objective of having a huge season in every competition. Achieving that would be a great way to advertise myself for a place in the France's Euro squad."