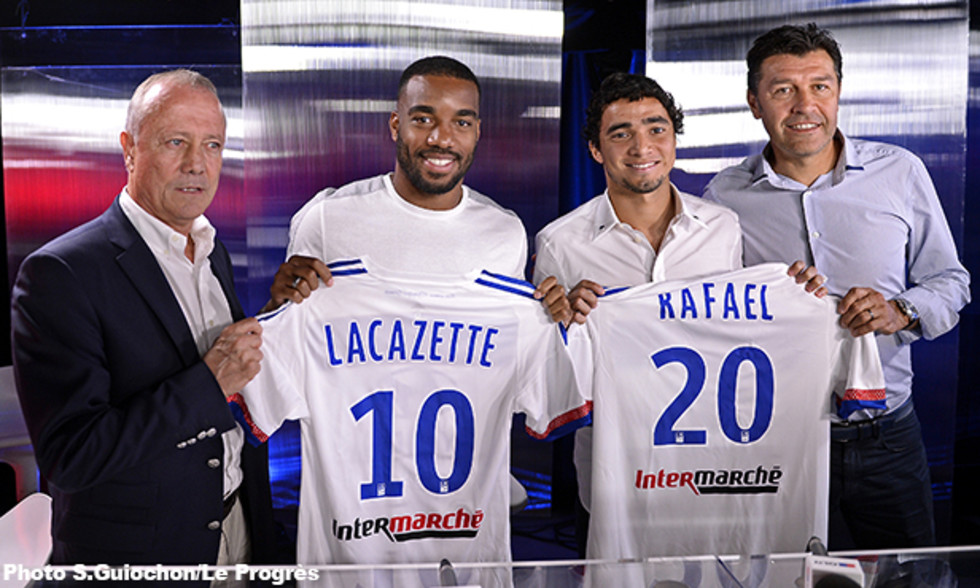 Rafael had signed his contract on Tuesday evening, while speculation on Lacazette's contract extension has endured all summer long. Will he re-sign? Will he leave? Now everything's considerably clearer, thanks to this press conference with president Jean-Michel Aulas, his advisor Bernard Lacombe and first-team coach Hubert Fournier.

Jean-Michel Aulas
"It's an immense pleasure to welcome Rafael da Silva to the club. He has come to OL to follow on from his rich experience with Manchester United. He comes with considerable experience - 26 Champions League appearances (29 in Europe in total) - and he was our first choice for this position.

Bernard Lacombe
"I saw him play for Fluminense eight years ago. He will bring his immense experience to bear and it will be a real plus for the squad.

Hubert Fournier
"I'm very grateful to the president for authorising this transfer. And we're even happier about it as Christophe (Jallet) has just sustained an injury. You should have a chance to see Rafael line up against Lorient. In the longer term, he's a choice recruit because he's very versatile. He can play on the left as well as further up the pitch. This was an important factor for us. All told, the arrival of a player of his calibre generates only positives. He will bring his experience to

bear in Europe. He's in the running for a starting place this season."

Rafael
"I'm happy to be at OL. I've been warmly welcomed by everyone. I hope to be a plus for the team and the club, which boasts an impressive history. My objective to win titles, to conquer. I've only ever heard positive things about the club and the city. And all the Brazilians I've spoken to about it only spoke very highly of OL. My position? Above all I prefer to be out there on the field, be it on the right or the left. I really learnt how to defend when I came to Europe and it's true that my first instincts are to attack. But still, it depends on the moment, on the match. It's up to the coach to decide where I play. The Brazil team? I think that if I play well, I can reasonably hope to be called up."

After the presentation of Rafael, the attention turned to Alexandre Lacazette and the singing of his contract extension.

Jean-Michel Aulas
"We reached an agreement for a one-year extension. Alex is thus a Lyon player until 2019. I'm very happy with this decision. Alex thought it through well and took many things into consideration. We discussed it often with Alex and his entourage. We all needed to show patience in order to do things correctly. This extension will inject new energy in to the squad just before our new league campaign kicks off."

"I'm very happy and proud to extend my adventure with OL. It was long and complicated, but everything was clear in my head. I always had the desire to stay at the club and I refused offers to leave. Beyond that, it was up to my advisors to negotiate in my best interests. Whether I extended or not wasn't the most important question for me because I was under contract and it was a good contract. The beginning of the season? They were pre-season friendlies. And it's better that we hit a rough patch when we did rather than later in the season. Now people can stop speculating about where Lacazette is going; I hope people just talk about me when I score and when my team has won. My objectives? Anything is possible. I don't have a fixed target in terms of the number of goals I score. I just want to perform well, make progress, win a trophy and go as far as possible in the Champions League."

Hubert Fournier
"First of all it was important for Alex to get this out of the way so he could move onto other things. The staff were dealing with the situation but, like with Nabil (Fekir), we saw that things like that can perturb a player somewhat. It's important for a player to be physically prepared but the mental side of things is hugely important as well. Hopefully Alex will now kick his season off in style and the team will kick into gear."

Bernard Lacombe
"It's very, very satisfying for the club. He had an extraordinary season 2014-15. Alex has so much talent! It’s a real plus for the team."

OL president Jean-Michel Aulas too the opportunity of the presentation and the extension to run the rule over OL's plans for the transfer window.

"We have been very clear on the subject. Due to the injuries to Clément (Gernier) and Gueïda (Fofana), we need to find a midfielder with something of an attacking bent. We're continuing to discuss the subject and things will advance during the next week. Valbuena? With each passing day we make a bit of progress with each issue… We also want to recruit a high-level central defender. Our participation in the Champions League dictates that we have to reinforce this part of our team. Discussions are under way. Those with OM concerning Nkoulou haven't been finalised but we're not closing the file just yet. We're sensing a bit of reluctance on the part of OM even though the player wants to join us. So we'll see what it takes for OM to make a decision. We're also looking at other solutions in order to make sure we resolve the situation as quickly as possible."

To wrap up, Jean-Michel Aulas talked about the summer's new signings, the departures, all the contract extensions and this year's operating budget, which will be in the order of €180m (an 80% augmentation) - the second-biggest in France, behind PSG. And to conclude: "Sunday's match is a priority. We need to start the league season well. We can feel that expectations are high and that a lot of people are paying attention."