This is not America! 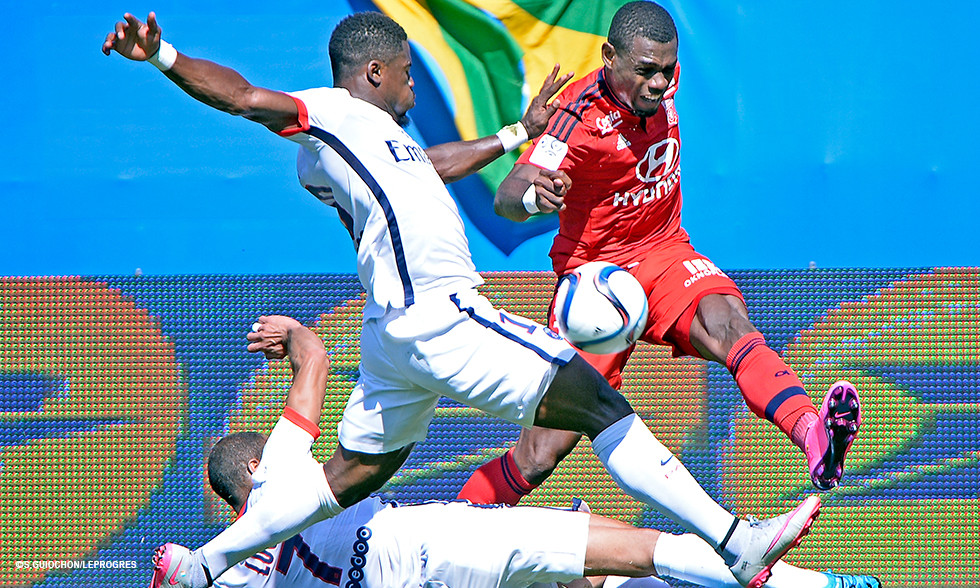 The Trophée des Champions is the official curtain-raiser for the French football season. With PSG having snaffled up all domestic trophies on offer last season, the capital club were pitted against their Ligue 1 runners-up - Olympique Lyonnais, who had managed two 1-1 draws against PSG in the league last season. Pre-season preparations were hindered by the staggered return from holidays of various international players. PSG wrapped up am 18-day North Amercian training camp and tour with some strong performances in friendly matches. Meanwhile OL were far less convincing, going down 6-0 to Arsenal. PSG had claimed the previous two editions of the Trophée des Champions, but OL still hold the record with seven wins, two of which have come at the expense of… PSG, both through penalty shoot-outs.

OPPONENT
While awaiting the arrival of Di Maria, PSG have taken care of other business by signing 'keeper Trapp and midfielder Stambouli. Cabaye returned to England. Mott is looking to leave the capital club. And Laurent Blanc spoke of some unrest in the dressing room that could be sorted out before the end of the transfer window. Blanc made the most of the pre-season period by handing game time to some youngsters, like Augustin, who made a big impression by scoring five goals. PSG gave every indication that their hunger for titles remains intact and that their well-oiled play and individual brilliance are still in full effect.

It was according to form and availability that Laurent Blanc and Hubert Fournier composed their line-ups for the big game. Circumstances played a big part on Fournier's opting for a 4-3-3: Grenier, Fofana and N'Jie were all injured and Fekir suspended. Beauvue started, Jallet and Bedimo returned. For PSG, Trapp started in goals. In their habitual 4-3-3, Rabiot replaced Motta, Cavani started on the left of attack and Thiago Silva ran the show from the centre of defence.

FIRST HALF
The fans at the Saputo Stadium seemed fairly pro-Paris as they whipped up an ovation for Ibrahimovic. PSG dominated possession, as expected, but OL were solid at the beginning despite Cavani's making a brief incursion. But when OL failed to adequately clear Lucas' free-kick, Aurier opened the scoring with a header! Clinical finishing made the difference. PSG dominated, completely in control, and then doubled their advantage after Ibrahimovic's missile, blocked by Lopes, fell for Cavani to blast under the bar and in. OL saw precious little of the ball and were restricted to a few wayward efforts from distance. Cavani and then Rabiot came close to widening the gap after strong pressing yielded opportunities. The half ended with a superb technical move from Ibrahimovic and an unbelievable miss from Matuidi. Faced with a clearly superior PSG, OL had been under the ump and began to show signs of physical fatigue.

SECOND HALF
Aurier proved dangerous from the off in the second half, with PSG continuing to dominate possession and Ibra dropping back and racing forward at will. Lopes once again proved decisive. Aurier ran amok on Lyon's left flank. It wasn't much of a contest despite Jordan Ferri's indefatigable efforts… there was too much imprecision from the Lyonnais!!! Ibra broke on the counter but fired wide as Lopes stared him down. Then Cavani was stopped by 'Antho'. And Gonalons was sent off after a second yellow card… PSG continued their walk in the park without having to try too hard, hanging onto the ball until the final whistle. OL hadn't mustered a single shot in the second half… until the 89th minute, when they got their first shot of the match on target.

SUMMARY
Unfortunately OL showcased the difficulties they are going through at the moment… Hardly reassuring, especially with captain Gonalons sent off. Fortunately Lopes was on hand to save his team from a truly embarrassing scoreline. Now it's up to Lyon - who could point to certain key absences as an explanation for the result - to learn their lessons from this defeat. PSG simply confirmed their rapacious appetite for titles, showing enormous potential even during a transitional period and with several key absences.