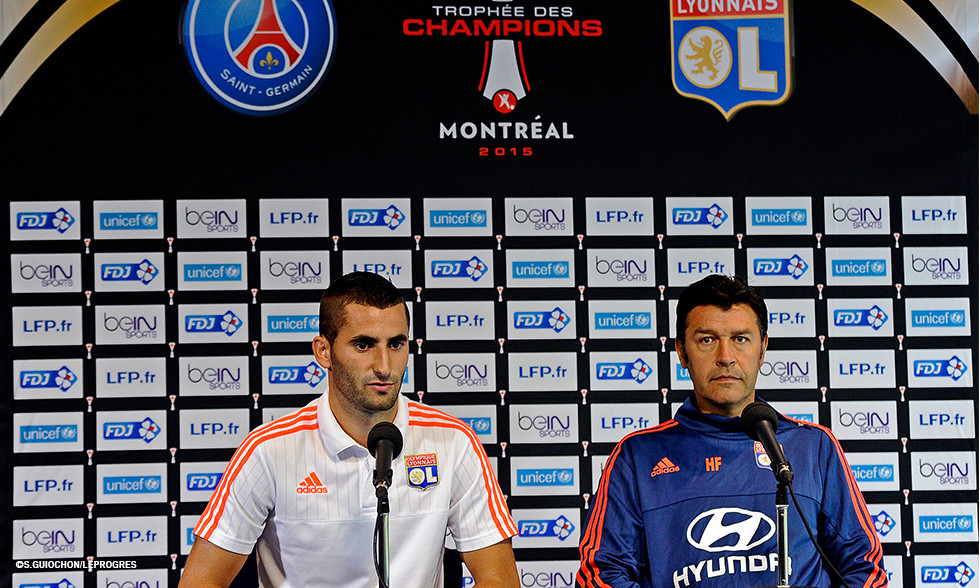 Is this an important match for you?
"It's important because it's for a trophy and it's the chance to start the season on a positive note. We want to find some form, but first and foremost, we want to win this trophy."

Is your 4-4-3 formation just because of the current situation?
"It's adapted to the players that are currently available, in order to find the solutions to what happened against Arsenal. We don't want to experience the same thing again."

Is there a risk of heads dropping?
"The loss to Arsenal showed the team that there is still a gap between us and Europe's best. The defeat was a blow to our confidence. We know we will be playing a form team that is almost unchanged from last season."

How has Claudio Beauvue settled?
"He has settled very well. He is very open and friendly. We believe in him. He will start on Saturday."

Are you surprised by PSG's good form?
"They are already in good form with a winning mentality. That's the result of a good preseason and the club's ambition."

How will you stop PSG?
"We need to show the desire to defend as a team. We can't leave them space and we must take advantage of any openings. We are going to need to work hard, chasing the ball."

How is Alex Lacazette?
"Alex isn't yet the Alex of last season. He isn't in the same form. Is that due to his situation? He lacks a little rhythm and he needs to play with more freedom."

Is there a big divide between you and PSG?
"Yes, we have had very different results in our friendly matches. But friendly matches are not real competition - that starts on Saturday and that will be different. We will work hard to trouble PSG and win the trophy."

Pressure?
"There is always pressure at OL. We need that pressure to get results. We have to do a job on the pitch to satisfy our very ambitious president."

Are you worried about another heavy defeat?
"Not at all. We played PSG last season and matched them pretty well. We have other qualities too and we want to cause them more problems this season."

Will you be able to fight with PSG on Saturday and throughout the season?
"We have prepared as well as possible, knowing that there is a considerable gap between the two sides. But, in football, things can change very quickly."

The OL squad?
"You will have to ask that question to the president and the coach. We have lost Clément (Grenier). We have to replace him. We need a big squad to attack a big season."