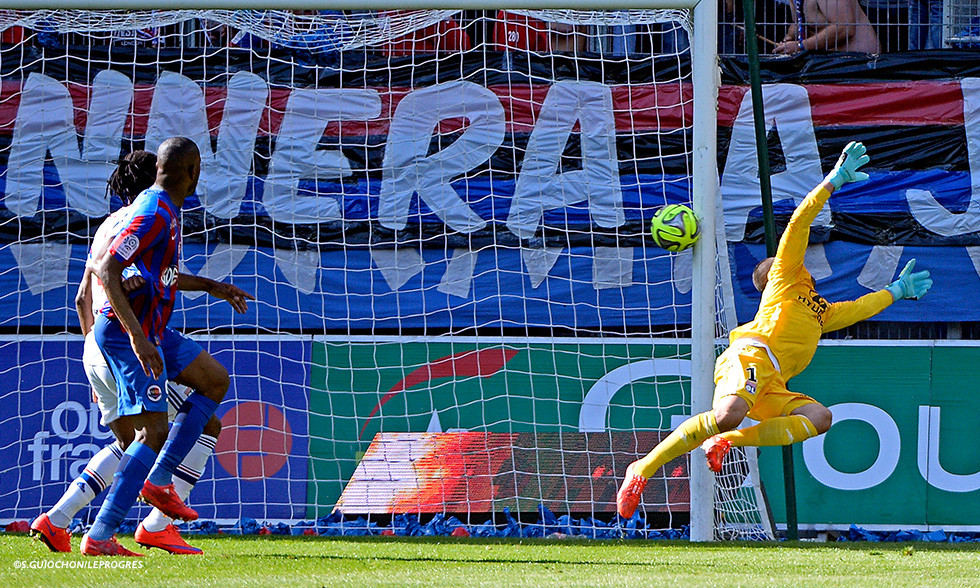 After a disastrous first half of football, OL lost 3-0 to Caen, seeing any chance of the championship evaporate and failing to cement that top two finish and automatic qualification for the Champions League… A very bad trip… and a real lesson to be learned in Normandy…

Both sides were desperate to win. The Stade Malherbe de Caen could all-but secure their place in Ligue 1 for next season with two matches to spare, while OL could assure Champions League qualification and at the same time keep the pressure on at the top behind a Paris Saint-Germain side that have won their last seven matches in a row, scoring 26 goals in the process to move above OL in terms of goal difference as well.

With Jallet suspended and NJie injured, Hubert Fournier went with the most obvious solution, with Grenier moving to the playmaking role just behind the front two of Lacazette and Fekir, while Ferri returned to the starting XI in midfield; Dabo replaced Jallet at right-back and B. Koné started alongside Umtiti in the centre of defence. For the Stade Malherbe, Yahia was missing. Féret was only fit enough for a place on the bench. Seube sat just in front of the defence in a 4-1-4-1 formation.

Lyon had the better of the opening exchanges, but it was Caen that had the first real chance with Privat's header. The home side grew in confidence and took the game to their rivals... Lacazette turned the Caen defence inside out before Gonalons had a good header. The referee, Mr Bastien gave Nangis a yellow card for diving when it looked a clear penalty! Vercoutre produced a great save to deny Lacazette and then Tolisso's header. The intensity rose another notch... the ball flew from one end to the other… Grenier again tested Vercoutre. Koita missed the unmissable… It was an entertaining match of football, really passionate stuff. Caen had another great chance to score. Finally Benezet scored after his initial corner came back out. Few could deny SMC the opening goal, even if it should never have been a corner to start with... But the second goal, just minutes later, was a wonderful individual goal, by Benezet again. Caen were right on top, OL were beaten one-on-one in the challenges... The Normandy side led deservedly 2-0 at half-time...

Zeffane came on at half-time to replace Bedimo - apparently a tactical decision by Hubert Fournier. Benezet continued to inspire his teammates in midfield. Stade Malherbe stayed disciplined and stuck to the game plan… although they did start to sit deeper and deeper. OL controlled the ball, attacking in wave after wave... but Caen resisted. Grenier's free-kicks... Fekir's dribbling... Yattara came on for Ferri. Fekir was again denied by an excellent Vercoutre as was Yattara. . Malbranque came on for B. Koné. Privat missed a great chance, but made up for it on the counterattack just a few minutes later with the third goal. Game over! The Stade Malherbe de Caen really produced a superb display... OL were so disappointing...

Punished for a dire first half, out thought, out muscled, OL were unable to find the finishing touch to their second half domination. Former OL goalkeeper Rémy Vercoutre was the start of Caen's second-half resistance... The title may have got away... The second place is not yet confirmed... and Lacazette will be suspended for the final match of the season.