When the two best attacks meet… 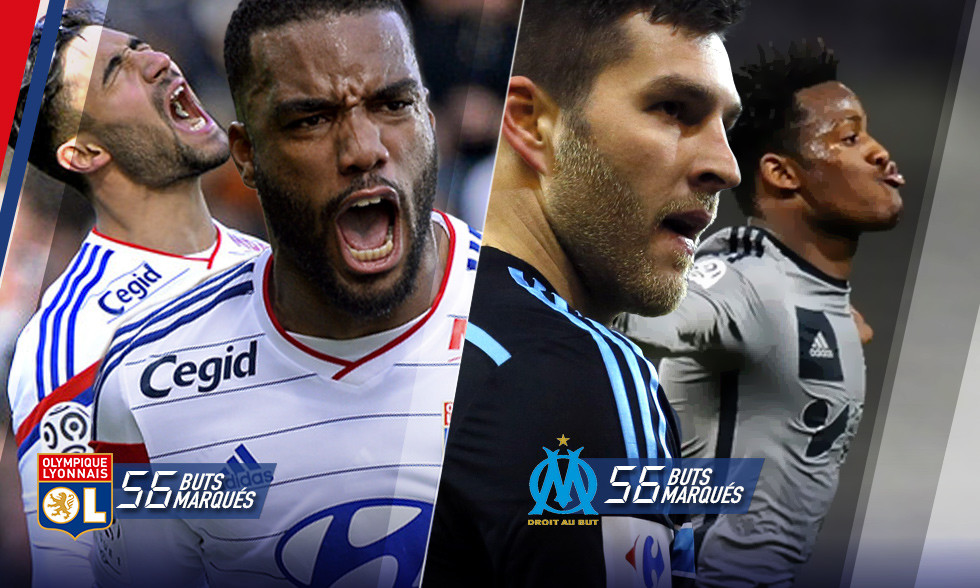 Boasting 56 goals scored in the league so far, the two best attacks in Ligue 1 go head to head on Sunday in the match of the round. Take a closer look at OL and OM's attacking virtues...

The other attacking weapons:

Michy Bathsuayi is making his mark. The Belgian striker has scored four goals in his last three matches, having netted just two in the first 25 rounds of the season. Less than four minutes after coming on against Saint-Etienne, he had already netted a brace. Against Toulouse last weekend, he had scored after just two minutes, before adding a second late in the first half. He is scoring more, because he is playing more. He has the second best scoring ratio between goals scored and minutes played in Ligue 1 with a goal every 111 minutes… only Alexandre Lacazette has done better!

Dimitri Payet continues to delight his teammates. Against Toulouse, the playmaker laid on his tenth assist of the season. He is far and away the leader in Ligue 1 in this department. He also features in the top five of Europe's top leagues, behind De Bruyne (15), Fabregas (15), and Messi (14) and level with Ronaldo (10).

Florian Thauvin has scored five times and provided three assists this term. But, the 22-year-old left footer isn't in the best form at present. He has only scored once since November. André Ayew has been in brilliant form since the Africa Cup of Nations. Aside from his influence on the squad and OM's play, the Ghanaian has scored three goals in his last four outings - as many in the first half of the campaign.

His deceptive controls and his mesmerising dribbling make him the most fouled player in Ligue 1. Opposition defenders know that Nabil Fekir, who is the third-best dribbler in the league with an average of three successful dribbles per match, can go all the way if they can't stop him. 11 goals, 7 assists, 5 penalties earned… the Lyon forward is almost unstoppable. With Alexandre Lacazette he forms the third-most prolific duo in Europe behind Messi and Neymar and Ronaldo and Benzema, and ahead of Robben and Müller, Costa and Hazard and  Aguero and Silva…

Gourcuff, Njie, Ghezzal, Yattara, Benzia, Ferri and Tolisso also play important roles in their sides attacking prospects. The first in that list, with three goals and three assists will not travel to Marseille. The ever-present midfielders will be there and, as the stats confirm, Jordan Ferri, 1 goal and 4 assists, and Corentin Tolisso, 6 goals including two in his last two games, won't hesitate to get forward. Clinton Njie is the third most decisive Lyonnais this season with three goals and five assists to his name.