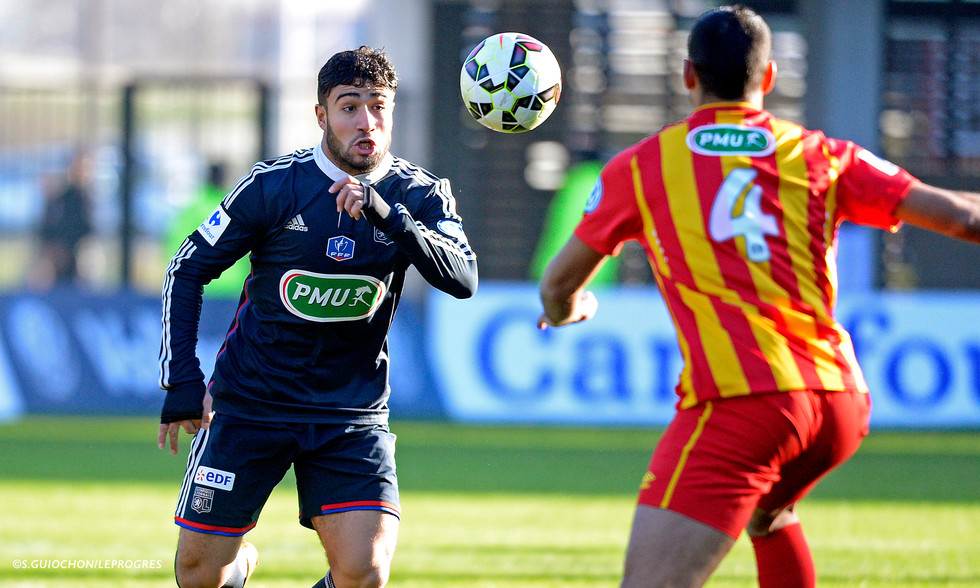 After racing to a 3-0 lead inside the opening 30 minutes, Les Lyonnais largely dominated their Coupe de France rd-of-64 clash, before conceding two late goals against a courageous Lens side. But Lyon start 2015 with a win and qualify for the next round...

"Our elimination from the Coupe de la Ligue means we have to go as far as possible in the Coupe de France. It's obviously an important match for us." Jordan Ferri left no doubt. Getting past this first obstacle in the Coupe de France is a priority, the first objective of 2015, or else the club will have only the championship to play for. In Calais, on a heavy pitch against Ligue 1 opposition, it promised to be a tough game, despite the recent good form...

Hubert Fournier wasn't taking any chances. With Yattara, Koné and Bedimo off at the Africa Cup of Nations, and Gourcuff and Benzia coming back from injury he decided to go with the same starting XI that performed so well against Bordeaux in the final match of 2014. Dabo and Njie both started. For Lens, they went with a 4-3-3 formation without Valdivia, Sylla and Nomenjanahary, all out, but with the dangerous pairing of Coulibaly and Guillaume in attack.

There was no observation round. Lens fired the first shots in anger but were blocked by the defence or Lopes. Les Lyonnais responded with clinical efficiency. Riou palmed out Lacazette's shot but Fekir, slightly offside, followed up and tucked the rebound away (6’). On a counterattack, Guillaume got on the end of El Jadeyaoui's cross, but Lopes made a majestic reflex save. On the counterattack that followed, Njie tried two efforts with the outside of the foot... in vain. Lacazette was on fire in the opposition box. Le Moigne brought him down. The Lyon striker picked himself up and scored from the penalty spot (13’). Every time Lyon accelerated the play they looked dangerous. The pitch was degrading quickly. Guillaume couldn't get enough angle on his header. Dabo then finished off an excellent team move and a superb pass from Lacazette (30’). And the two almost combined for a fourth a minute later. But Lens refused to lie down, however the OL rear-guard dealt comfortably with their attacks. OL held a deserved 3-0 lead at the break against an enterprising but outclassed opposition.

Les Lyonnais clearly maintained the upper hand at the start of the second half. Lens looked to hit on the counter. The 'home' side looked resigned to defeat... with half an hour left to play... Fekir drew another save from Riou. With the match seemingly over as a contest, the coach brought off Lacazette for Ghezzal. The new man stung Riou's palms from distance. On another Lens counterattack, Bisevac made a last-gasp tackle on Chavarria who took too long to shoot. Njie was again denied by the Lens 'keeper. Yet another Lens counter ended with Gonalons fouling El Jadeyaoui in the area and the winger scored from 12 yards out (76’). Lens had a ray of hope. Les Lyonnais weren't as cutting going forward but never looked in too much danger either. Malbranque hit the crossbar with a half-volley. From a corner, Coulibaly rose highest at the back post and Lopes could only parry the ball into the net (90’). There was one final chance for Lens to send the game into extra-time... but OL held on!

Thanks to an excellent start and some clinical finishing Les Lyonnais largely dominated the match… before a scare in the final stages. It was a let off! The attacking duo of Lacazette and Fekir struck again. OL begin 2015 where they left off in 2014, with a 12th victory in their last 17 matches.