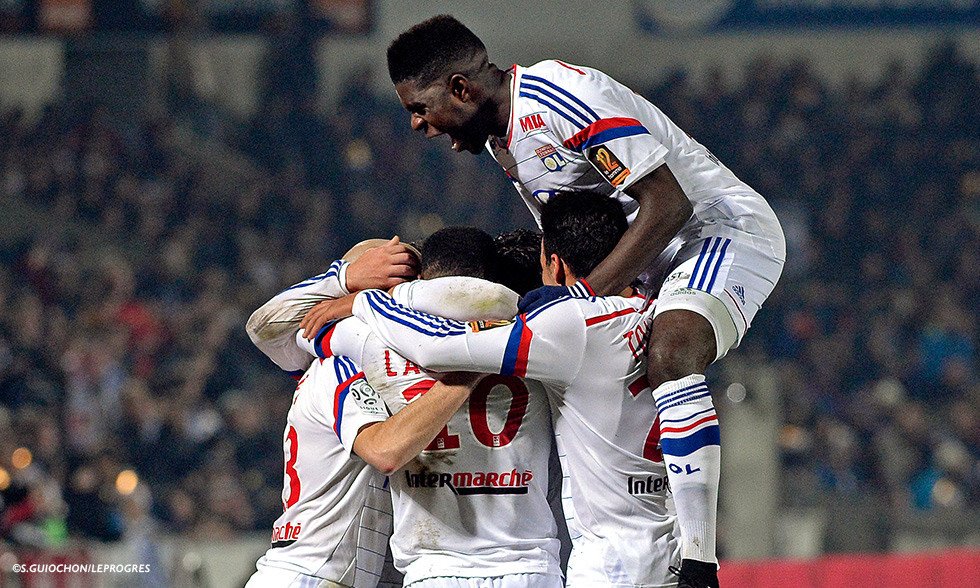 Deserved winners over Bordeaux, OL leapfrog above PSG and stay right behind OM… a remarkable end to the year for Maxime Gonalons and his teammates…

OL can't finish the year in top spot, but can overtake PSG into second place with a win and close to within two points of leaders Marseille. They will also keep Les Stéphanois three points behind them… Les Girondins can also jump up the standings with a win. Three points would see them close to within two of OL and the top three. Both clubs played and lost on penalties in midweek in the last-16 of the Coupe de la Ligue. Bordeaux are the only team in the land, along with PSG to be still undefeated at home this season (6 wins and 2 draws).

Hubert Fournier, sticking with his 4-4-2, was without B. Koné, Malbranque, Benzia, Fofana and Grenier. NJie started up front with Lacazette and Dabo was preferred to Bedimo at left-back. Only Jussié and Poundjé were missing for Les Girondins. Willy Sagnol started with three at the back.

A sell-out crowd was on hand for the last competitive match of 2014. And the match started at a cracking pace with a Fekir lob and a close-range Diabaté header inside the opening three minutes. Then Lopes made a brave double save. Fekir started on the left and Njie on the right. It was an entertaining game. Les Bordelais looked dangerous down the left flank. OL changed formation and slowly wrested control of the game, without causing Carrasso to many problems. The first half dropped in intensity with plenty of fouls. OL almost scored when NJie raced clear, only to be cleared by Carrasso (36'). But the Bordeaux 'keeper was left helpless when Gonalons won possession and Fekir released Lacazette to score a wonderful opener. It was a deserved reward for OL. Fekir then gave the Bordeaux fans a scare. OL led at half-time, having taken control of the game in the second half of the opening 45 minutes.

Willy Sagnol changed his formation, taking off central defender Yambaré and introducing the forward Saivet. Les Girondins switched to a 4-4-2 formation. Tolisso, after some good pressing, doubled the advantage (56'). Ferri had the chance to make it 3-0. OL were finding more and more space as Bordeaux went chasing the game. Bordeaux were then reduced to ten men when Pallois was sent off for a foul on NJie, who was replaced by Ghezzal (66'). It was mission impossible for Sané and Co.! OL were too strong as they went in for the kill. Fekir got the third goal from a long ball from Lopes. Then Ferri finished off a Lacazette assist. And Lacazette added the fifth from a Bedimo cross. A triumph... a football master class.

39 points at the winter break, the best attack in Ligue 1 and second place on the ladder capped off a fantastic first half of the season and fills OL with ambition and hope for the campaign. The win in the Gironde was their third away win of the season and the team heads off on holidays on the back of four consecutive wins. Once again, they showed their individual and collective strength without forgetting their tactical intelligence.