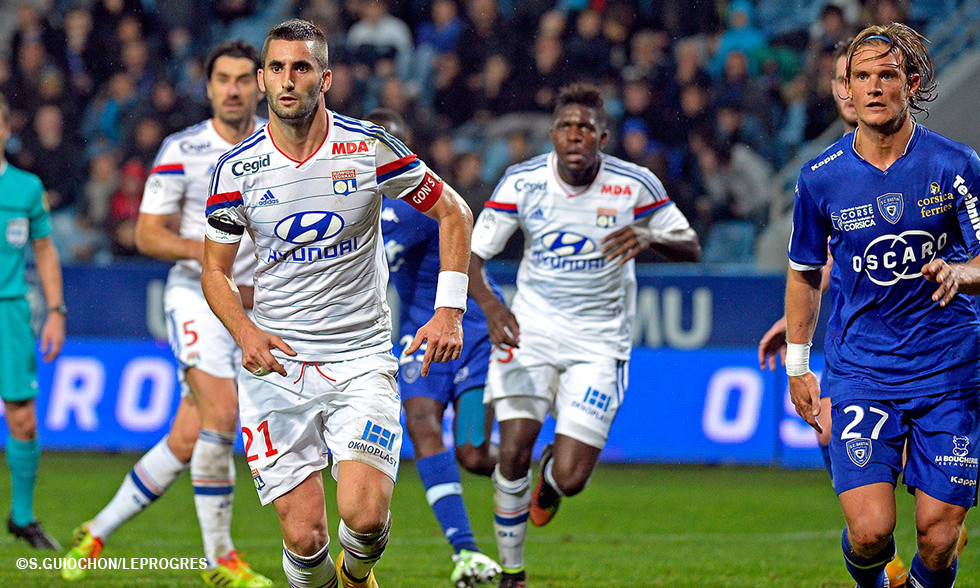 Defence won out in Saturday's clash between Bastia and Lyon. OL weren't their usual selves going forward, especially in the first half. However the draw sees them extend their undefeated run...

Would the international break see OL lose their form? Undefeated in two and half months, OL had won their last five games in a row, before Gonalons, Lacazette, Jallet, Tolisso, Bedimo and Co. headed off on international duty. But the team needed to maintain the cracking pace of OM and PSG to stay in the leading trio. Starting this weekend and a dangerous trip to Bastia.

Despite the continued absence of Grenier, still not fit after a groin operation, and Fekir, suspended, and the long-term absentee Fofana, Hubert Fournier had a strong side to choose from. In the end Gourcuff wasn't on the teamsheet. The coach went with a midfield comprising Tolisso, Mvuemba and Malbranque. For Bastia, Squillaci, Boudebouz and captain Cahuzac all started in a 3-5-2 formation.

After a minute's in the memory of Ilija Pentolic and Alain Gilles it was time for the match... Les Lyonnais struggled with Bastia's high-pressing game. Bedimo launched the first attack, but the referee failed to award him a penalty for a tackle by Diakité. The packed Bastia midfield was causing a lot of problems in the opening 15 minutes. Bastia's first chance came from a free-kick, cleared by the defence. Les Lyonnais slowly came into the game after a difficult opening 25 minutes. But it was at this moment, that Bastia had their best chance of the match when Kamano's charge was stopped in extremis by Bisevac. Both sides struggled to construct the play and OL's first actual shot of the game came in stoppage time at the end of the half from the boot of Mvuemba.

It rained down bookings at the start of the second half… Umtiti almost found the top corner with a free-kick. Cahuzac on Malbranque went unseen by the trio pf referees..  Tempers flared. On the counterattack, the substitute Ayité, forced Lopes into a good save. The OL custodian was then called upon to deny Cahuzac. Aerola then made the save from Yattara. Space was opening up in the last quarter of an hour. Yattara fired wide from the edge of the area. Bastia were finishing on top, illustrated by Belgian international Gillet. Benzia went within a whisker of getting on the end of Jallet's cross. But it finished scoreless...

Les Lyonnais suffered in the face of Bastia's high pressing and really struggled to get the ball into attacking positions, especially in the first half. It was a physical, fiery match... a real battle... And a slow return from the international break, just one week ahead of the derby...