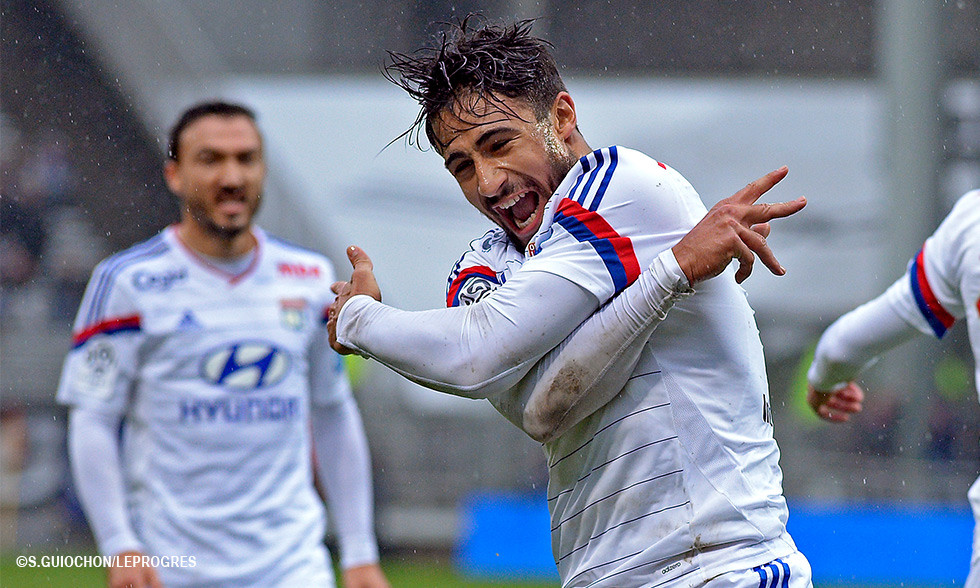 OL did it tough, but OL defeated Guingamp and continued on it's undefeated run... Three more points... before sitting back to watch Le Classique...

OL were looking for a ninth match without defeat and a fifth consecutive win to stay in the top three and take full advantage of the result in Le Classique. EAG played on Thursday night in the Europa League and thanks to their win over Minsk, they stay in the hunt to qualify for the rd-of-32. In the domestic league they need the points to avoid dropping back into the relegation zone. It may come down to a team well rested from a week's preparations and another that played a European tie in midweek...

Ferri and Gourcuff were absent along with long-term injuries to Fofana and Grenier. Captain Gonalons returned. Hubert Fournier a chose to align Fékir at the point of the OL diamond midfield. Lacazette and Njie started up front. For the Brittany side, Jérémy Pied started in attack in a 4-2-3-1 formation. There were a couple of changes from the side that played on Thursday...

There's was barely time to let any nerves creep in! After a short corner, Fékir's cross was flicked on by Bisevac for Lacazette to head home beyond Lössl. An 11th goal in the league for the OL No.10. Gonalons then headed just over the crossbar. OL looked dangerous every time they came forward at speed, or when they built slowly from the back. Fékir half-volleyed home Jallet cross for a wonderful second; brilliant! EAG finally came into the game through Beauvue in the 23rd minute… OL looked solid both in attack and in defence. But Marveaux produced a stunning free-kick on the cusp of half-time to reduce the arrears. EAG were still alive… OL lacked a little domination in the final stages of the opening period.

EAG showed their intentions right from the restart. Malbranque turned and hit the post. OL's speed in attack caused constant problems for the visitors. On the hour mark, the away side had a huge chance to equalise. EAG pushed… space opened up at both ends. Yattara replaced NJie. A Samuel Umtiti handball went unpunished... Gonalons headed just wide. Beauvue followed suit. Mvuemba came on for Bedimo, injured in a tackle. EAG had OL on the ropes… and took risks with the introduction of Mandanne. Yattara met a Lacazette cross but couldn't apply the finishing touch. Lopes then saved the result against Mandanne. OL looked nervy. But that didn't stop Fékir scoring a third goal with a clinical finish, before Lopes produced another great save! OL won by showing great resistance during the periods where Guingamp had the upper hand.

It was a very difficult second half against a lively Guingamp side. But OL did what they needed to, to record a fifth successive win. OL sit in third place and can close in either of the two leaders depending on the result in Le Classique... OL have taken 23 points from a possible 27 in their last nine matches!