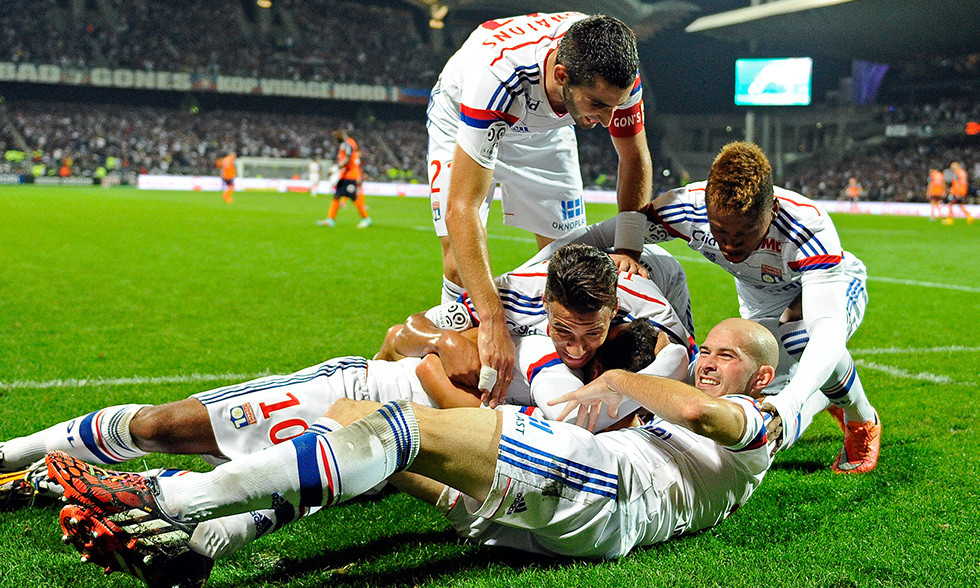 In a thrilling and entertaining match of football, OL recorded a huge 5-1 victory over a Montpellier side that never threw in the towel… OL picked up three precious points and climbed to fourth ahead of next weekend's visit of leaders Marseille…

Hubert Fournier went with the same starting XI that started against LOSC. A 4-4-2 with Fékir alongside Lacazette in attack. For Montpellier, with Deplagne injured, Congré was on the right side of the defence with Barrios at the top of a 4-2-3-1.

The first shot of the match was from Lyon as Ferri lined up his sights after good lead up work from Gourcuff. But the first real chance fell to MHSC when Barrios raced clear, only to fire wide. The visitors started well as OL struggled in the opening 15 minutes. Both sides looked to get forward quickly. Fékir forced a first save from Jourdren (29'), with the first shot on target in the game. OL pressed well and looked to occupy the full width of the pitch and were rewarded with a goal to Gourcuff who pounced on a loose ball in the area. Moments later, Lacazette released Fékir for the second with a lovely chipped finish. OL appeared to have made the difference with two explosive passages of play. Half-time came after another great chance to Ferri. After a slow start, OL had taken complete control midway through the half and looked to have made the game safe. The attacking trio of Lacazette, Fékir and Gourcuff looked in particularly ominous form...

Rolland Courbis brought on two attackers at the break… Jallet, ever so slightly offside then cut the ball back to Gourcuff for the third goal just a minute after the restart! Tiené then reduced the score with a stunning free-kick after a foul by Umtiti. MHSC had a great chance to make it 3-2 with another free-kick, saved by Lopes. Montano then had another chance with a header... wide. OL were struggling… and picked up four yellow cards in just 12 minutes... before seeing Bérigaud miss the target with another header! OL had lost their way, but Umtiti put them back on the right road with a solo raid and shot that was saved... just. Lacazette then added his eighth of the season after a counterattack led by Njie. Malbranque made it five… OL with their highs, and a couple of lows, looked very dangerous against Montpellier and deserved their 5-1 victory.

This latest victory sees OL up to fourth place and plenty of renewed ambition, despite committing too many fouls and picking up too many silly cards. OL impressed through its efficiency in front of goal. OL has taken 14 from their last 6 matches and scored 16 goals in the process.