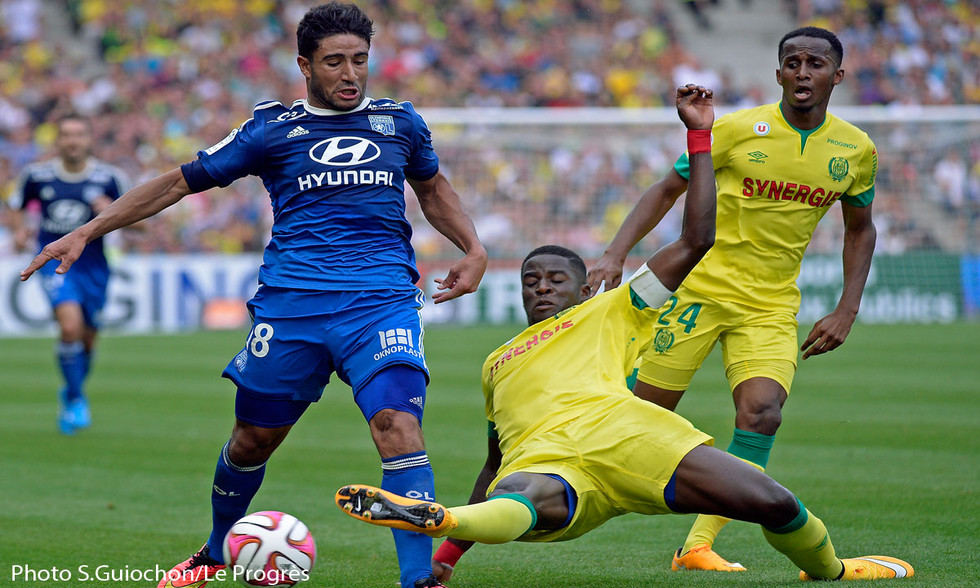 Olympique Lyonnais brought back one point from La Beaujoire after an excellent draw against a very good Nantes side. Koné opened the scoring, before conceding the penalty for the equaliser. Either team could have won it in a grand stand finale...

Only Monaco had picked up points at La Beaujoire this season. Les Nantais had won their previous three home matches, making one of the best home teams in the land. Thanks to a solid defensive foundation and plenty of speed in attack, Nantes are a dangerous proposition, pushed on by a passionate home crowd.

Michel Der Zakarian went with an attacking line-up with a flat 4-4-2 with Bammou and Shechter in attack and Audel and Bedoya on the wings. Lyon were also playing a 4-4-2 formation, but with the club's traditional diamond shaped midfield. Malbranque had the playmaking role, while Fekir stepped up to partner Lacazette in attack.

Les Nantais clearly made the better start. Slowly OL played their way into the game, looking to put their foot on the ball and hold it up in attack with Lacazette and Fekir prominent. The former released the latter, but Riou saved with his feet. It was not enough to calm the ardours of the home side... Lopes saved from Bammou, Shechter then missed the target from a great position, before OL defended a series of corners. Illustrated by Bedoya's fierce strike that flashed past the post, Nantes lacked precision in their final shot. Lyon were struggling to carve out chances, despite the excellent Fekir. Lyon started to see more of the storm and dominated the possession in the final five minutes of the half. But it was still Les Jaunes looking the most dangerous... never more so than when Bedoya headed against Lopes' post. It was scoreless at the break - a good result for OL given the way the match had played out...

Les Lyonnais caught Les Canaris cold at the start of the second half. After five minutes, a Lacazette free-kick found Koné to head home, giving Riou no chance. OL had taken full advantage of Nantes' inability to finish... until now... because a harsh foul by the goal scorer in the area gave Veretout the chance to equalise from 12 yards. Lyon were going to have to stand strong in those final 20 minutes as a euphoric Nantes through everything at their opponents. Gakpé tried his luck from distance, but couldn't hit the target. He then inherited possession on the edge of the area, but his effort was blocked by Koné. Alhadur was then denied by Lopes. The ball flew from one end to the other, with a powerful blocked shot from Lacazette and a rampant Njie. Both sides could have won it in a frenetic, breathless finish.

Les Lyonnais missed out on the chance to move seventh. But given the way the game ebbed and flowed, it was a good point away from home. After a difficult first half, they stood tall in the second half and could even have left La Beaujoire with all three points...