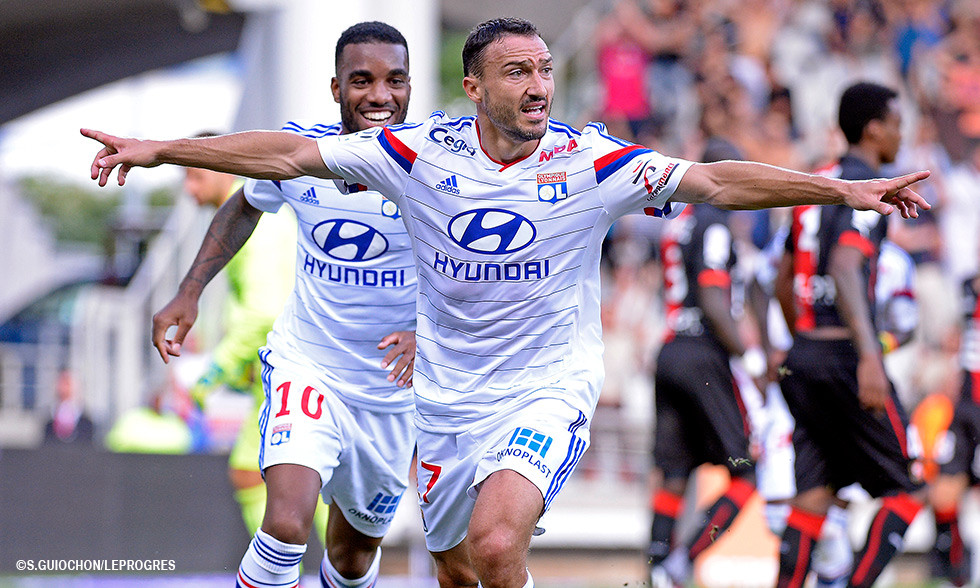 Olympique Lyonnais made a victorious start to the new Ligue 1 season with a 2-0 home win over Rennes, courtesy of an excellent second half and goals to Malbranque and Lacazette. However the win came at a cost with Fekir injuring his shoulder...

It was set to be a great tactical battle between the two coaches and friends. Hubert Fournier, with a number of absentees, went with Umtiti and Rose in the centre of defence. Tolisso was at left back. He maintained his diamond-shaped midfield. Philippe Montanier built his starting XI around his most experienced players with Costil in goal, Armand in defence, Danzé and Makoun in midfield and Toivonen in attack.

First Half. The match began with a wonderful 40m run from Lacazette… and then a beautiful left-foot volley that was blocked by Costil. The visiting goalkeeper was then called into action again to deny Fekir from 20m out. The Rennes defence was struggling with the runs of Lacazette. His next run ended with a shot that skewed off the side of his boot. Mbengue, beaten by Yattara, brought the striker down on the box… but the referee didn't blow. Fekir, who fell awkwardly, was forced off, replaced by Malbranque. Ferri went on a superb run, exchanging passes with Yattara, but was reeled in, in extremis. The absence of livewire Fekir saw OL struggle to upset the Rennes defence. The rest of the off offered little in terms of goal-scoring chance until... Tolisso's header smashed against the crossbar.

Second Half. OL started the second half as they finished the first: dangerous from set pieces with headers from Gonalons and Yattara. Without success. Ntep raced clear on the counterattack, before cutting inside and missing his chance. Lacazette set up Yattara, denied by Costil. Les Lyonnais looked short on ideas and inspiration. Before Mabranque stepped up. Picked out by Ferri in the area, he checked inside and fired across Costil who couldn't get down quickly enough. After being nice on Rennes, the referee turned the tables, ignoring the visitors own penalty appeals. However after an obstruction on NJie, he finally awarded a penalty to Lyon. Lacazette put it away. After the joy, there was still a scare when Toivonen's free-kick flirted with the post. Rennes could find no way back into the game. OL controlled the final minutes and even had chances to net a third with Bahlouli's curling effort and Njie's header off target.

Conclusion. It was a deserved victory for OL who dominated large periods of the match. The only dip in the performance was in the moments following Fekir's exit just before half-time. But Les Lyonnais bounced back in the second half, led by a Lacazette in fine form. OL's defence, despite a host of absentees, held firm and looked solid.