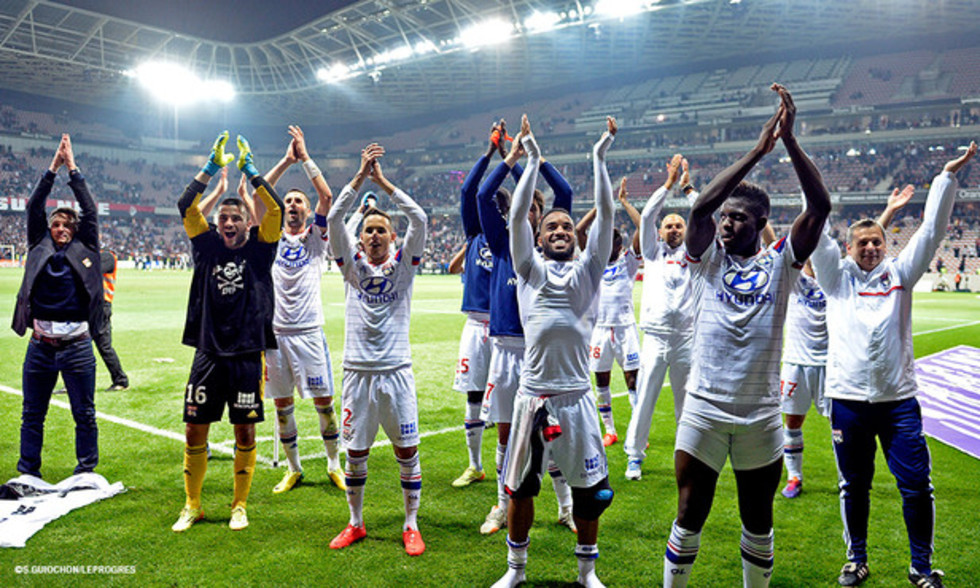 With three matches to play in the final month of the 2013-14 season, and a victory away to Nice in the final game of the campaign, OL qualified for European competition for the 18th year in a row...

At the end of this veritable marathon, OL's entire season rested on their result away to Nice on 17 May (1-0). Beaten by OM (4-2) and FC Lorient (0-1), the team was still in control of their own destiny before they headed to the Côte d’Azur and needing to match OM's result. An early goal to B. Koné set Les Lyonnais on the path to getting the result they needed. But from then no it took courage, mental strength and solidarity to hold on. In the end, OM's result was irrelevant. In OL's 61st and final competitive game of the season, the club qualified for the third preliminary round of the Europa Ligue. Mission accomplished. OL booked their place in Europe for the 18th season in a row!

Before the match against Nice, OL were beaten at the Stade Vélodrome against a Marseille side that took full advantage of 'Lyon's gifts'. We thought Maxime Gonalons and Co. would bounce back against FC Lorient… but it didn't happen. Reduced to ten men with the harsh sending off of Mou Dabo in the 14th minute, OL failed to overcome a well-organised Lorient who scored with a goal on the counter. OL could no longer catch Verts for fourth place and remained within the clutches of Marseille who, fortunately, only picked up a point from their trip to Bordeaux, despite opening the scoring!

However May was also the month when Rémi Garde announced his departure. The OL coach will be replaced by Hubert Fournier. May also represented the final matches in a Lyon shirt for several players. Out of contract, Gomis and Briand will be leaving the club. Vercoutre signed for Caen in early June. Malbranque signed a new two-year deal. What does the future hold for Miguel Lopes who was on loan? Others may be transferred.

And finally, this was the month squads were announced for the World Cup. Clément Grenier should have been going to Brazil, but pulled out with injury. Henri Bedimo is with Cameroon. Maxime Gonalons and Alex Lacazette were named in Didier Deschamps' 30-man squad but didn't make the final 23... It was a similar story for Anthony Lopes, with Portugal...