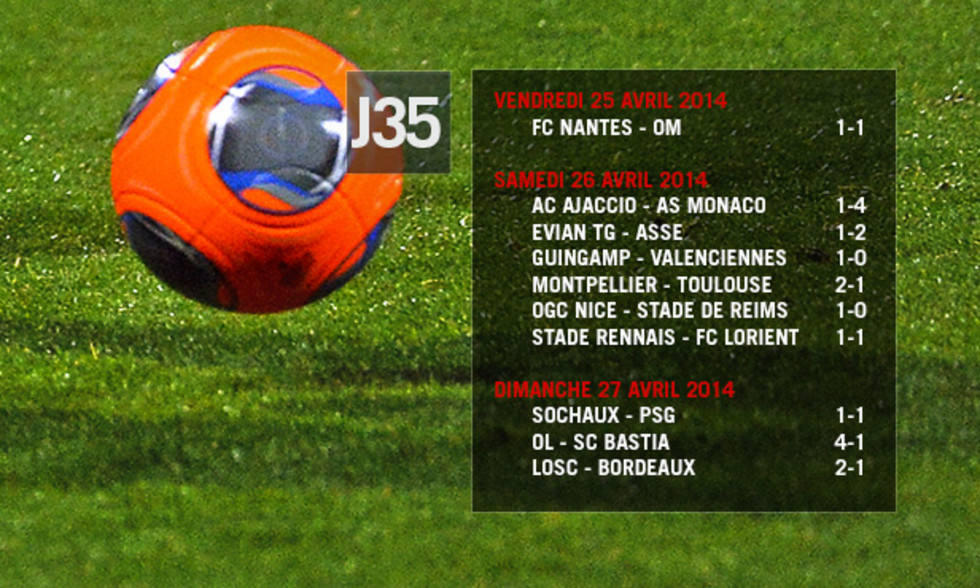 Paris aren't French champions for two reasons! The capital club lost at the Stade de Gerland and Monaco beat Rennes. At the other end of the table, the relegation battle is heating up between Valenciennes, Sochaux and Guingamp.

Ferri, the master blaster. His third goal of the season, all from outside the penalty box, saw OL claim the prestigious scalp of leaders Paris Saint-Germain and close to within two points of neighbours Saint-Etienne. It's only the second loss this league season for Paris and the second time they have failed to score.

Signorino, an unlikley scorer. With his first shot in L1 since 2005, Reims defender Franck Signorino knows how to take a chance. But his goal wasn't the winner as Saint-Etienne equalised late on. After last weekend's draw with Nice, Les Verts have taken just two points from a possible six.

Lille, one goal was enough. Against Valenciennes, Les Dogues recorded their ninth 1-0 win of the season. They have won their last three games in a row and hold onto third place, where they have been since Week 13. Rivière, the providential goal scorer. By scoring the winner against Rennes, he became Monaco's outright leading goal-scorer. But more importantly, Monaco stayed six points clear of Lille.

Marseille, Spring has sprung. After enduring a winless month of March, Les Marseillais defeated Montpellier 3-2, to make it back to back wins… a first since November last year. Bordeaux, European dream over. Les Bordelais well held by bottom club Ajaccio. While Lorient recorded their first away win of 2014, against Nice.

Sochaux, home grown hope. Les Sochaliens beat Toulouse 2-0, a side undefeated away from home since November. Sochaux have won five and drawn one of their last six home matches. They are now just five points behind 17th-placed Guingamp. Evian, all change. Like Sochaux, Les Haut-savoyards are giving to everything to survive the drop. Thanks to their win over Bastia, they have picked up nearly as many points in the last 11 games as they did in the preceding 22!

One is worried, one is calm. Thanks to their narrow win over Guingamp, Nantes have taken another huge step towards survival. They are now ten points clear of the relegation zone. However the other promoted side, Guingamp are slipping dangerously towards the drop zone!

ALL THE NEWS FOR OL - PSG I  FIXTURES I  STANDINGS