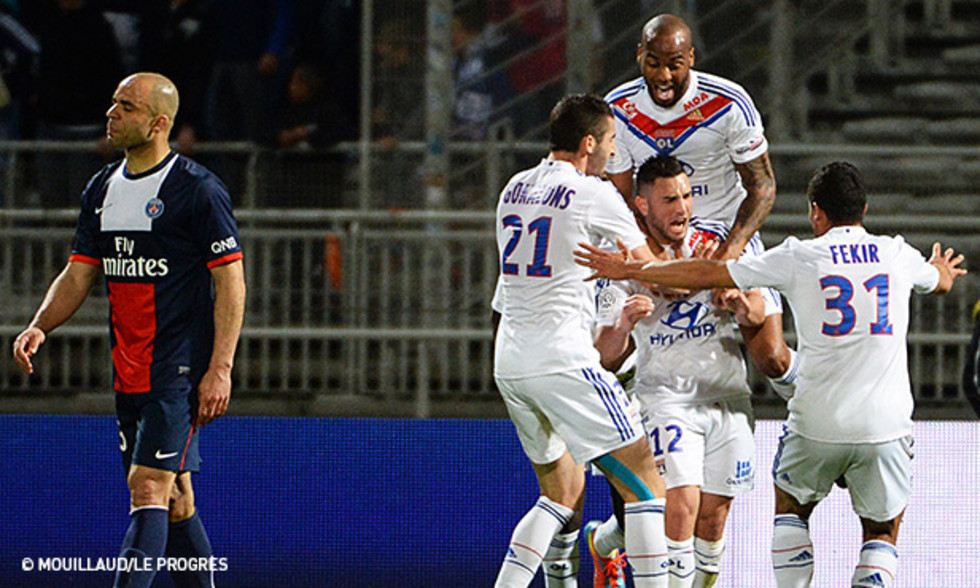 OL defeated the league leaders Paris Saint-Germain 1-0! Ferri scored the crucial goal and Lopes was imperial between the posts as Lyon kept their European hopes alive. Once again, Les Lyonnais showed great heart to counter Paris and cause another huge upset.

How would they bounce back from the disappointment of their Europa League elimination? This loomed as a crucial match in the race for Europe as Saint-Etienne dropped another two points earlier in the day. OL coach Rémi Garde showed confidence in Fekir in the number 10 role with Gomis and Briand in attack. Dabo was prefered to Bedimo. Ibrahimovic was again missing for Paris.

Paris looked to deprive Lyon of the ball. Just two minutes in and Lopes performed his first miracle. The OL 'keeper produced a sublime save to deny Cavani's header. At the other end, Sirigu was called upon to deny Gomis' powerful half-volley. Gomis then got the better of Digne and Thiago Silva, but his left-foot shot flashed the wrong side of the post. Gomis, him again, drew another save from Sirigu.

Ferri, with a wonder goal

It was hard to get the ball off the Parisians... but Lyon were not troubled in defence. Both side's struggled to carve out chances. But Ferri only needed one. On the half-hour, the midfielder curled a perfect shot beyond the diving Sirigu from the edge of the area. The stadium exploded in joy. For all their possession, Paris were behind. Lopes claimed another Cavani shot. Then Cabaye shot across the face of goal. As the half time whistle went, PSG had the ball, but OL had taken their chance.

After the break, Koné was replaced by Umtiti. The match had a similar air. Les Lyonnais were rarely troubled… only Digne's miss-hit cross caused concern. Cabaye tried his luck and Lopes made another save. The Lyon 'keeper then kept out another Digne effort.

OL looked dangerous on the counter. They just needed to defend well. Briand could only glance a Ferri cross wide. OL's midfield was breaking dangerously... Sirigu leapt to touch over another vicious Ferri effort. Lopes responded, turning behind a free-kick. PSG were starting to make mistakes and Lyon looked to hit them hard on the counter. Ten minutes left to hang on. And they did it well. Thanks in large part to an imperial Lopes, who threw himself in front of Pastore... The stadium was in rapture as OL recorded a stirring victory...

ALL THE NEWS ON OL - PSG I  FIXTURES I  STANDINGS