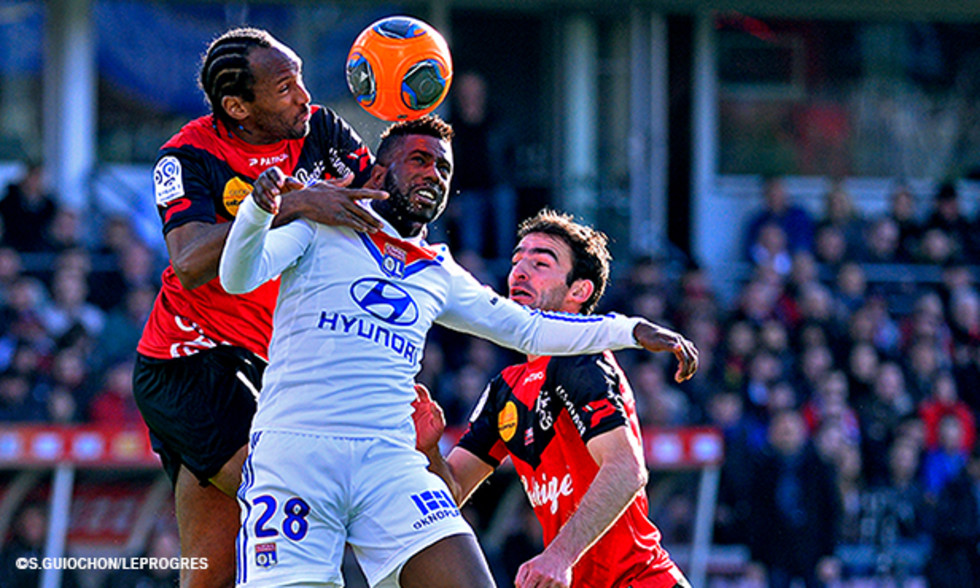 OL defeated Guingamp 1-0. A courageous Olympique Lyonnais had to fight to the very end to maintain their one goal advantage after Gomis fired them in front. It was a precious victory in the race for European competition next season... the result was tarnished, however, by 3 new injuries...

Les Lyonnais didn't have any more time to lose. After their bitter loss last weekend, the team needed to get back to winning ways to reignite their charge for the European places. The aim away to Guingamp was to put more points between themselves and OM and Reims and keep the ressure on Saint-Etienne, who won earlier in the day, and Lille, who drew later in the evening with Monaco. Rémi Garde was without a number of players and made three changes to the side that qualified for the Europa League quarter-finals against Plzen…Mvuemba, Malbranque and Gomis were preferred to Tolisso, Gourcuff and Briand. Guingamp were without their top scorer Yatabaré.

A slip, a bobble…the pitch was not in good condition

As expected, the pitch was poor. Both sides enjoyed a number of corners as Lyon had the better of the opening exchanges. OL were winning all the second balls around the area, especially through the lively Ferri. Lacazette had the first shot with a missile from 25 metres out. Samassa saved. Les Guingampais responded and Lopes had to dive to deny Alioui from a tight angle. The Guingamp 'keeper then saved again from Lacazette. Giresse sent in a free-kick that Lopes punched clear.

The match struggled to get off the ground

The two teams stayed well-organised and disciplined, leaving little space to their opponents... only Lacazette found space to shoot... over. Les Lyonnais struggled to find their marks in midfield and the intensity dropped out of the game. Samassa almost made a mess of a corner... After a dour first half, OL needed to lift the tempo after the break if they wanted to claim all three points...

Alex with the assist, Bafé with the goal

No sooner said, than done. From a superb diagonal ball over the top, Samassa was beaten by Gomis' half-volley back across the face of goal as OL opened the scoring! Lopes saved as Guingamp looked to fight back. OL's goal sparked the home side into action... Alioui drew a spectacular stop from Lopes from 25 metres out.

OL were then hit by two injuries to Dabo and Bisevac. Sarr and Tolisso came into the game. Les Lyonnais struggled to put their foot on the ball. A solo run from Lacazette caused panic in front of Samassa's goal… Mvuemba's resulting free-kick ended in the side netting. Dembélé, clean through on goal messed up his finish. Released again, he missed another gilt-edged chance with only Lopes to beat. Gonalons cleared a Diallo header. Les Lyonnais couldn't get out of their half. Miguel played through the pain barrier for the final three minutes… Koné through himself in front of one last chance and the final whistle blew!